Unschoolers learn what they want, when they want 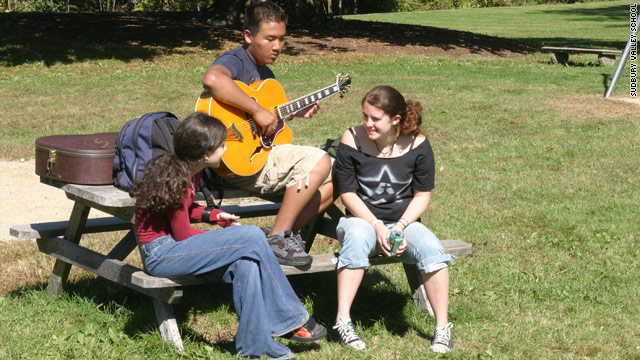 (CNN) -- Six-year-old Karina Ricci doesn't ever have a typical day. She has no schedule to follow, no lessons to complete.

She spends her time watching TV, doing arts and crafts or practicing the piano. She learned to spell by e-mailing with friends; she uses math concepts while cooking dinner.

Everything she knows has been absorbed "organically," according to her dad, Dr. Carlo Ricci. She's not just on summer break -- this is her life year round as an at-home unschooler.

"It's incredible how capable she is," Ricci said in a phone interview from his home in Toronto, Ontario. "And I think that all young people are that capable ... if you don't tell them they can't or they're not allowed, they surprise us in a lot of ways."

Ricci is professor of alternative learning at Nipissing University and an advocate of unschooling, a concept that's gaining popularity in both Canada and the United States thanks to frustration with the current public education system. In unschooling the child is in control of his/her learning. They are free to decide what they want to study, when they want to study it.

Experts say there are about 2 million home-educated students in the U.S., and Ricci estimates 10% adhere to unschooling ideals. In addition, there are more than 20 Sudbury schools -- private institutions that follow the same philosophy -- in North America. A new one is set to open in Toronto next fall.

The unschooling philosophy is based on education pioneer John Holt's 1964 book "How Children Fail." Put simply, Holt wrote that living is learning. He believed children should follow their innate curiosity and passions rather than being forced to learn hordes of information they will never use.

"I think our education system as a whole is, to me, in a very delicate and precarious place," Sudbury Valley staff member Mimsy Sadofsky said. "It keeps trying to do what it can't do, which is make every child learn everything in the whole wide world. It's like heading toward a cliff."

Sadofsky remembers the terror she and her husband felt after deciding to enroll their children in the Sudbury Valley School in Framingham, Massachusetts. It was 1968 and her son was unhappy with the rules in his first grade class. But could they entrust a 6-year-old with his education?

"Our education system as a whole is, to me, in a very delicate and precarious place.
--Mimsy Sadofsky

"What an enormous risk we were taking with our children's lives," Sadofsky said, thinking back. "You're told to take care of your children and that schools will give them a good education. Suddenly, you're turning it around."

But Sadofsky's kids flourished and are an example of unschooling's success: one is a mathematician, one is a software coordinator-turned-jam entrepreneur and the third is a geologist.

"They have, and I think this is true of [Sudbury] alumni in general, an incredible sense of who they are and how they work, and confidence in their abilities," Sadofsky said. "Not that they know everything, but they know how to find what they need."

Sudbury schools are democratically run, meaning every student and employee has one vote, whatever their age. The only rules are set by the student body and can be changed by a majority. The overlying theme -- respect for yourself, others and the property -- is taken more seriously, students say, because you're judged by your peers instead of an authority figure.

Classes are offered but not mandatory -- "certifications" are required to use equipment such as sharp cooking utensils. There are no grades. Staff members often do not have a teaching background; they are there simply to guide students in their individual pursuits.

It's this lack of structure that has child psychiatrist and Harvard Medical professor Steven Schlozman concerned. 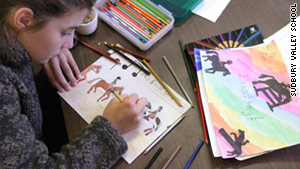 A student draws in the art room at Sudbury Valley School.

"There's something wonderful about the idea of just letting kids be kids... focusing just on what they like, can do or are passionate about," Schlozman continued. "The only thing is, they also live in the world and the world is going to need things from them."

Schlozman said students need trained adults to help them make that leap from what's wired in our lower brain functions (walking, talking, eating) to higher brain functions (understanding why "To Kill A Mockingbird" is a good book) because pre-adolescent brains lack the capacity for abstraction.

"I would say we could stand, and would probably do better, with less structure in education... the flip side of that though is that there has to be a middle ground," Schlozman said. "Otherwise you end up with a potential chaos taking the place of maximum learning."

Calls to the National Education Association for comment on unschooling were not returned.

"It was a radical idea... I'm certain at the time when I made the transition none of us knew exactly what I was getting into."

Locke spent most of his first year at Sudbury Valley playing video games. Then he discovered the music room across the hall. Eventually he became comfortable enough to spend hours chatting with other students in the common room.

"The conversation in SVS is radically different than in public schools," Locke said. "There's no age segregation, no time limit. We would have a wide variety of topics, some of them totally lewd and some of them more deep and philosophical."

"It's more about taking charge of your time rather than choosing to do nothing.
--Molly Morningstar

Unschooling advocate and former SVS student Freya Sargent said that even seemingly aimless activities like this have a purpose -- they lead kids to discover new interests.

"A lot of parents express concern that 'my kid is going to end up doing nothing,'" Sargent said. "And that may be true for a certain amount of time, but we as a species are very curious and we have this innate need to learn... People may sit around for a while, but then they get bored and they want to be involved."

Locke is now studying neuroscience at Harvard University -- a passion he developed after wondering how music translates across cultures (remember the Mario Bros. theme song?).

Approximately 90% of Sudbury Valley's graduates go on to college (compared with 69% of graduates from the public education system). Those opposed to unschooling often say students will have trouble adapting to the real world when confronted with grades, tests or working 9 to 5 under an authority figure.

Molly Morningstar isn't worried. The 19-year-old pre-med student at Hapmshire College in Massachusetts said the freedom she found at SVS didn't teach her to avoid work -- it taught her to work hard at whatever she enjoyed.

"Freedom is a funny word," she said. "[The] structure of being a doctor is freedom in a sense because it's what you chose to do with your life. I feel like I'm a very free person right now -- but I still work as a barista at a café 30 hours a week. It's more about taking charge of your time rather than choosing to do nothing."