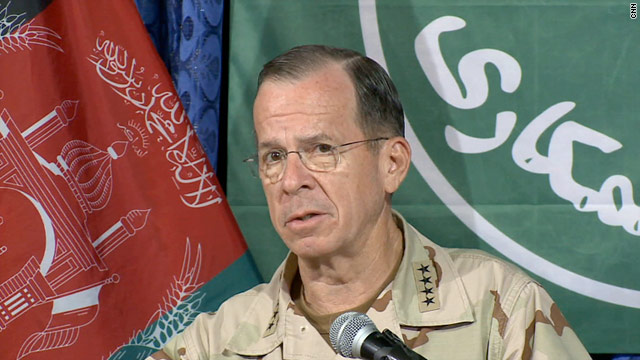 Kabul, Afghanistan (CNN) -- Joint Chiefs of Staff Chairman Adm. Mike Mullen said Sunday during an unannounced visit to Afghanistan that he doesn't know whether soldiers will continue to receive paychecks if an agreement over the U.S. debt ceiling cannot be reached.

"I certainly hope it gets solved," Mullen told reporters.

America's highest-ranking military officer said soldiers had recently asked him about the crisis, saying "here we are, halfway around the world, fighting our country's wars, and I've got to worry about a paycheck."

Mullen said August 15 would be the first payday jeopardized if the United States defaults. Soldiers normally get paid in two-week increments, making the last assured payday on August 1, he said.

Senate leaders said Sunday that progress had occurred in the talks on a deficit reduction deal that would raise the debt ceiling and cut spending. However, the deadline for the United States to face possible default on its obligations is midnight Tuesday, and political wrangling in Congress has held up an agreement so far.

On Friday, Defense Secretary Leon Panetta issued a statement to remind military personnel that they should plan to come to work as scheduled in the coming week, regardless of whether a deal gets worked out. Panetta pledged to do "everything possible to ensure that our national defense is protected."

A Department of Defense official told CNN on condition of not being identified on the possibility of military pay being withheld, "it's not a question of whether, but when, if an agreement isn't reached."

The Treasury Department has not specified what might happen for troops if an agreement is not reached. But the impact could be substantial if a prolonged battle prevents the government from sending out millions of checks owed to active-duty soldiers, Social Security beneficiaries, federal employees and others.

Congress has until August 2 to raise the current $14.3 trillion debt ceiling. Otherwise, Americans could face rising interest rates and a declining dollar, among other problems.

Mullen said Sunday that he has seen progress in Afghanistan since a so-called "surge" of 33,000 additional troops.

Jon Stewart, host of Comedy Central's "The Daily Show," is also in Afghanistan to visit with troops, along with basketball player Karl Malone and magician David Blaine.