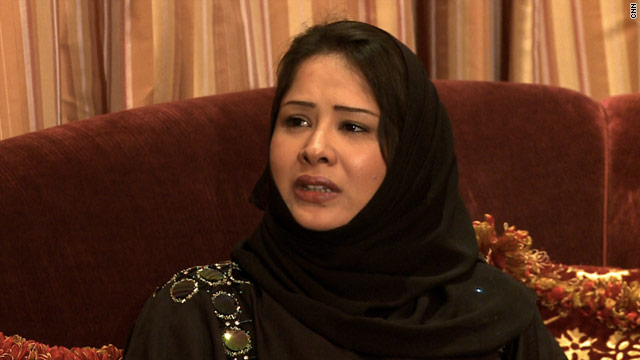 Alleged Libyan rape victim Eman al-Obeidy says she is excited and happy to be in the United States.
STORY HIGHLIGHTS

(CNN) -- Eman al-Obeidy, who caught the world's attention in March when she publicly accused members of Libyan leader Moammar Gadhafi's forces of gang-raping her, has relocated to the United States.

After spending 54 days in a U.N. High Commissioner for Refugees facility in Romania, Obeidy arrived in New York late Wednesday night, then boarded a flight to the destination where she will reside.

She told CNN she is excited and happy to be in the United States, and passed her thanks to the U.S. government and Secretary of State Hillary Clinton, adding that she hopes to meet her someday.

Other than her brief conversation with a CNN producer, she said she is not ready to speak to the media.

The relocation is the latest leg in a harrowing odyssey that began March 26, the day al-Obeidy stormed into the Rixos Hotel in Tripoli, Libya, where international journalists were having breakfast, and shouted that she had been taken from a checkpoint and held against her will for two days while being beaten and raped by 15 of Gadhafi's militiamen.

A scuffle ensued, and government officials and hotel staff whisked her outside to a car, and she was driven away.

She wasn't heard from for more than a week. In the days afterward, in interviews with CNN and other media, she spoke graphically of her ordeal and said she feared she would never feel safe in Libya.

In May, she escaped to Tunisia with the help of a defecting military officer and Libyan rebels, and found temporary sanctuary in Qatar before being deported back to Benghazi in Libya in early June.

She was granted asylum in the United States, and on June 6 arrived at the U.N.refugee facility in Romania.