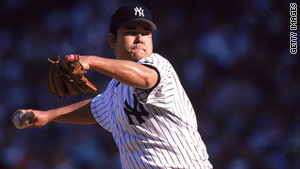 Hideki Irabu came to the United States from Japan in 1997 and retired in 2002.
STORY HIGHLIGHTS
RELATED TOPICS

Homicide detectives and representatives from the Los Angeles County Coroner's Office determined that he committed suicide, Sgt. Diane Hecht said Thursday. She did not know the method he used.

His body was discovered in his Rancho Palos Verdes home about 4:20 p.m. Wednesday, Hecht said.

Irabu, 42, was a successful and well-established player in Japan when he came to the United States after being drafted by the San Diego Padres in 1997, according to CNN affiliate KTLA.

But Irabu refused to play for the Padres. He insisted that he would play only for the New York Yankees, a stand that helped create the system that Japanese players currently use if they wish to join the Major Leagues before they are eligible for free agency, according to an article on Major League Baseball's website.

It was during Irabu's three seasons with the Yankees that he had an infamous altercation with owner George Steinbrenner, who called Irabu a "fat toad," the website said.

He played for the Montreal Expos and Texas Rangers before ending his time with the Major Leagues in 2002. Upon his retirement, he had a win-loss record of 34-35 and an earned-run average of 5.15, with 405 strikeouts in six seasons.

In the years since he retired, he spent some time pitching in his native Japan and for a team in an independent league in California.