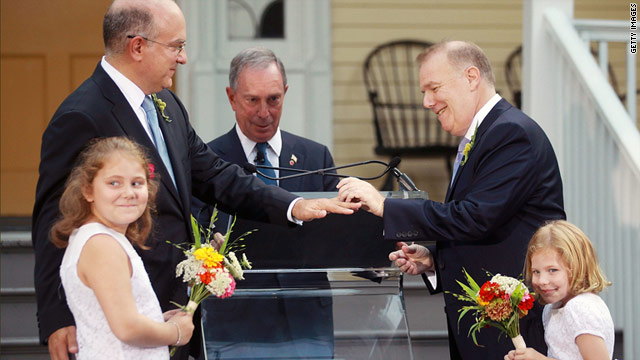 The lawsuit, in which New Yorkers for Constitutional Freedom (NYCF) is the primary plaintiff, seeks an injunction on the Marriage Equality Act, claiming that open meeting laws were violated, campaign contributions were promised, and Senate rules on debate were violated in order to enact the law, which took effect on Sunday.

In statements issued Monday, NYCF and Liberty Counsel, the nonprofit legal firm representing them, claimed that:

-- New York City Mayor Michael Bloomberg held a closed-door session with all Republican senators, "in violation of the Open Meetings Law," in which he pressured them to vote in favor of the act.

-- Bloomberg promised to make large campaign contributions to any GOP senator who voted in favor of the bill.

-- Gov. Andrew Cuomo violated the constitutionally mandated three-day review period before a vote was taken "by unjustifiably issuing a message of necessity."

-- Lobbyists and the public were shut out from the Senate lobby and "denied access to elected representatives," an act the groups said was unprecedented.

"Today we are asking the court to intervene in its rightful role as the check and balance on an out-of-control state legislature," said the Rev. Jason J. McGuire, NYCF's executive director.

"It is unfortunate that state senators chose to protect their personal interests, rather than the people they were elected to represent," McGuire said in a statement. "Some of the players may have changed, but it looks like same old Albany game. It is time the curtain be pulled back and the disinfecting light of good government shine upon the Cuomo administration and our state legislature."

Numerous calls by CNN to the governor's office and state Senate officials had not been returned Monday evening.