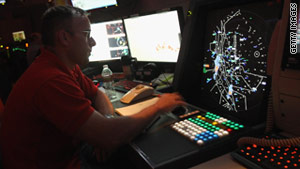 Air traffic controllers will remain on the job, but the furloughs will affect many other FAA employees.
STORY HIGHLIGHTS

Washington (CNN) -- Almost 4,000 Federal Aviation Administration workers are facing furloughs after Congress adjourned Friday without passing a measure to reauthorize the agency's funding, according to the Transportation Department.

A $2.5 billion program providing grants for airport construction projects also will shut down, and thousands of construction jobs could be jeopardized.

In a news release, Transportation Secretary Ray LaHood said he was disappointed that lawmakers did not pass a reauthorization and that funding was set to run out at midnight Friday. "Because of their inaction, states and airports won't be able to work on their construction projects, and too many people will have to go without a paycheck," he said. "This is no way to run the best aviation system in the world."

The release goes on to say, "The safety of the flying public will not be compromised."

Air traffic controllers will remain on the job, but the furloughs will affect many FAA engineers, scientists, computer specialists, community planners and others. According to the Department of Transportation, FAA workers could be furloughed in 35 states, Washington, D.C., and Puerto Rico.

Efforts to continue funding hit a stumbling block over House Republican efforts to make it harder for airline and rail workers to unionize and over a move to cut subsidies for air service to rural airports.

Rep. John Mica, R-Florida, chairman of the House Transportation and Infrastructure Committee, took issue with funding for the Essential Air Service program, which provides subsidies to ensure that small communities have access to passenger air service.

"It is unbelievable that after the House passed the 21st FAA extension, the Senate departed Washington and left the FAA and many of its employees behind," he said. "In light of the nation's pending financial disaster and soaring deficits, they couldn't find a way to cut even a few million dollars by accepting this minor request to reduce outlandish subsidies."

Sen. Jay Rockefeller, the Democratic chairman of the Commerce, Science, and Transportation Committee, issued a statement saying that he is concerned about the economic impact at airports in all 50 states and that the furloughs would end research on major new air traffic control technology known as Next Gen. "The House did a disservice this week, and I am hopeful that they will realize the error of their ways and return to the table so we can work out a compromise that restores funding to the FAA," he said.

FAA Administrator Randy Babbitt said the nearly 4,000 workers who will have to be furloughed "perform critical work," and he said they "do not deserve to be put out of work during these tough economic times."

Transportation officials said Congress has extended the FAA's funding almost 20 times without controversy. Without new legislation, the government also will not collect about $200 million a week in airline taxes that normally go to the Airport and Airway Trust Fund.