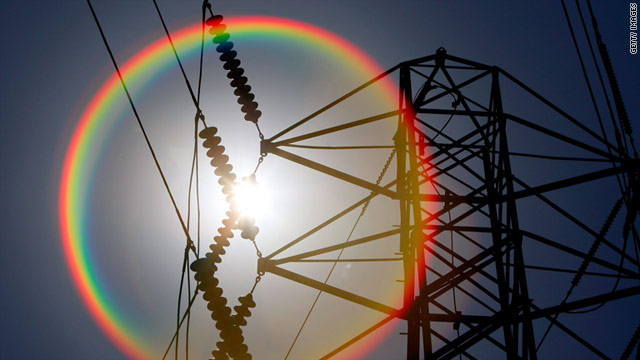 The heat wave is straining the nation's power grid, but one utility official says it plans years in advance for such events.
STORY HIGHLIGHTS

(CNN) -- The heat wave that's bearing down on more than 150 million Americans in the Midwestern and mid-Atlantic United States is also straining the nation's power grid.

The record temperatures and heat indexes mean more and more people are cranking on the air conditioners. Many regional electricity providers are reporting record usage this week.

Read the latest on the heat wave

In May, the power grid serving most of the mid-Atlantic region predicted a peak demand of just under 149,000 megawatts (one megawatt can run 1,000 air-conditioning units at full power). On Wednesday, that grid produced more than 150,000 megawatts.

CNN's Randi Kaye talked with Michael Kormos, an operations executive with Philadelphia-based PJM Interconnection, which serves 58 million customers in 13 states and the District of Columbia, who said his utility is well-prepared for the increase in demand.

CNN: How is your company doing in terms of providing power to its customers? Do you have enough?

Kormos: Yes, at this point, we believe that there is adequate capacity to serve all of the customer needs on the grid at this point.

CNN: Give us an idea of the situation: Are you at peak capacity, or do you have room here to play with?

Kormos: While we are at peak, this is the kind of week that we literally plan years for in advance to make sure the infrastructure's in place. We train all year long to be prepared and everything is running well, and the grid is holding up, and we expect not to have any brownouts in the foreseeable future.

CNN: What type of training do you do to avoid a brownout?

CNN: What if you do need more power? Is there anything you can do?

Kormos: We do have emergency procedures, as just mentioned. We can use what's called a brownout, where we lower the voltage that does decrease the power use. We also have the ability to ask customers, to either voluntarily or through contractual obligations, get off the grid at that point.

CNN: I've read that as a heat wave persists, it takes more and more power to maintain cool temperatures. Is that true?

Kormos: Yes, that's true. You normally end up with residual heat buildup in the buildings, and therefore the air conditioners are working harder to maintain the same temperature because of that residual heat.