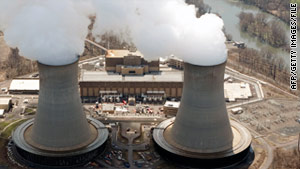 Homeland Security said it will work closely with state and local officials, including utility companies, to protect the nation.
STORY HIGHLIGHTS
RELATED TOPICS

Washington (CNN) -- State and local law enforcement officials have been told to look out for threats targeting private utility facilities in the United States, according to a new intelligence bulletin issued Tuesday by the Department of Homeland Security.

"While DHS has no specific, credible intelligence of an imminent threat posed to the private-sector utilities, several recent incidents highlight the ongoing threat to infrastructure in the utility sectors from insiders and outsiders seeking facility-specific information that might be exploited in an attack," DHS spokesman Matthew Chandler said.

The department will work closely with state and local officials including utility companies "to take steps to best protect from potential threats, including protecting our nation's infrastructure," he said.

A U.S. official, unnamed because he was not authorized to discuss the details, said there was no specific reference to 9/11 in the bulletin. The official also said security issues involving utilities have "been on the radar" for a long period of time and it's common practice to send out information so people will be more vigilant.