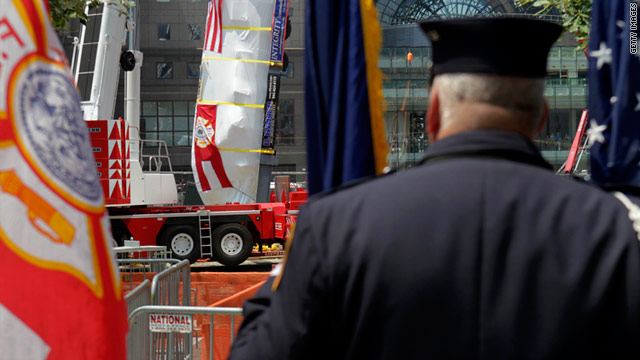 The Ladder Company 3 fire truck, covered in a white sheet, will be preserved at the 9/11 Memorial and Museum.
STORY HIGHLIGHTS

New York (CNN) -- Twelve firefighters from Ladder Company 3 who lost their lives trying to save people at the North Tower of the World Trade Center on September 11, 2001, were honored Wednesday in a ceremony at the 9/11 Memorial and Museum.

The 60,000-pound truck had been maintained by the Port Authority of New York and New Jersey in a climate-controlled room, according to a press release from the 9/11 Memorial Museum. It was escorted to the former site of the World Trade Center by the current Ladder 3 truck.

The fire department bagpipe band, the FDNY Emerald Society Pipes and Drums, played "America the Beautiful" as the truck was lowered to its permanent location, 70 feet below ground level.

"We will never forget the heroism of the hundreds of firefighters and other first responders who rushed into those burning towers on September 11," Bloomberg said in a statement. "The sacrifice of the Ladder 3 Company and the FDNY is something that should be honored by us all. Their names, along with the other courageous first responders who perished, will be permanently etched in bronze on the memorial and their truck will be preserved in the museum as a legacy of their heroism."

"All the memories come back, all the emotions," Robert Sweeney, chief of operations for the fire department, told CNN Wednesday. "Some anger, some pride in the department."

The firefighters from the East Village neighborhood company were conducting search-and-rescue efforts in the North Tower when the structure collapsed, Sweeney said.

The finished memorial is to include two waterfalls and reflecting pools surrounded by more than 400 trees and bronze plates inscribed with the names of the victims of the 9/11 attacks.

The memorial will be opened to 9/11 victims' family members on the 10-year anniversary of the attacks on September 11 of this year and will open to the public the next day.