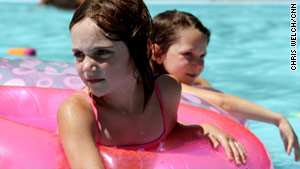 Children in Minneapolis escape the high temperatures by swimming in a public pool at a park.
STORY HIGHLIGHTS

(CNN) -- The dangerous heat wave blamed for as many as 22 deaths spread into the eastern United States on Wednesday, extending its reach across nearly half the U.S. population, officials said.

About 141 million people in a 1 million-square-mile area were under heat advisories and warnings, Justin Kenney, spokesman for the National Oceanic and Atmospheric Administration, tweeted.

The National Weather Service said, "These triple-digit temperatures are forecast to remain in place across the eastern U.S. through Saturday before cooling off slightly to the mid-90s by Sunday."

"After several days of deadly heat and humidity as many as 22 people have died," the National Weather Service reported Wednesday afternoon.

In Oklahoma, four heat-related deaths have been confirmed since May, said Cherokee Ballard, spokesperson for the state medical examiner. Three of those occurred in the past 30 days, including the deaths of a 3-year-old boy in a car in Norman and a 69-year-old man from Blackwell, she said.

Another eight Oklahoma deaths may potentially be related to the heat, Ballard told CNN, with most occurring in July.

For parts of the country that have already been scorched, some relief was forecast to arrive later Wednesday, the weather service said. A cold front moving across Montana Wednesday "will significantly drop temperatures across the north central U.S. for the rest of the week, though locations across the central and southern Plains and parts of the Midwest will not see much change from the extended period of heat."

But in the East, some of the worst temperatures were just setting in.

Excessive-heat watches, warnings and heat advisories were in effect in more than 30 states Wednesday, in what the weather service described as "a large portion of the central U.S. and Ohio River Valley, as well as portions of the mid-Atlantic and northeastern states. Temperatures will feel like 100 to 110 degrees or higher during the afternoon hours."

The heat wave in recent days has brought heat index values -- which measure how hot it feels -- to as high as 131, the weather service said.

Heat indices on Tuesday reached 129 in Newton, Iowa; 121 in Taylorville, Illinois; 122 in Gwinner, North Dakota; and 123 in Hutchinson, Minnesota.

Minneapolis recorded its highest dew point ever, 82 degrees, on Tuesday. The dew point temperature is a measure of atmospheric moisture.

Part of what makes the heat wave so dangerous is that it offers no break, even at night. Chicago on Tuesday tied its record for the warmest low temperature of 78 degrees. In Rockford, Illinois, temperatures dropped down only to 76 degrees -- the warmest on record.

The Centers for Disease Control and Prevention said people in areas affected by extreme heat should drink more water than usual -- and not wait until they feel thirsty. "Avoid alcohol or liquids containing high amounts of sugar," the CDC says.

The CDC also recommends taking cool showers or baths and avoiding direct sunlight. "Check on those most at-risk twice a day," the CDC said.