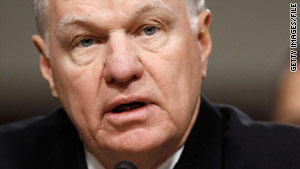 Washington (CNN) -- The Navy has already relieved so many commanding officers of duty this year that the chief of naval operations has written an unusual memo to all potential commanders reminding them of their responsibilities.

"Included as part of your responsibilities is the charge that you will be held accountable to the highest standards of conduct," said Adm. Gary Roughead in a memo sent out last month.

In the most recent incident this week, a squadron commander was relieved of duty for being drunk in Bahrain.

"We expect our commanding officers to uphold the highest personal and professional standards and a alcohol-related incident is not what we expect from them," said Navy spokesman Cmdr. Danny Hernandez

While the cause of some of the commanders being relieved of duty was stated by the Navy as "loss of confidence in ability to command" without specific details, other cases included allegations of drunk driving, inappropriate personal relationships, mistreating sailors, and failing to properly handle a loaded weapon.

The officers ranged in rank from commanders to captains to one rear admiral, who was relieved of command for "failing to ... hold himself responsible for the professional decorum of the ship and with it, the obligation to play an active role in the command climate for the crew ... provide adequate guidance and oversight; and ... take prudent measures to ensure compliance with Navy standards," according to the Navy.

One of the more public cases this year involved Capt. Owen Honors, commanding officer of USS Enterprise, who was relieved of command for demonstrating poor judgment while serving as executive officer of that ship. Honors is trying to remain in the Navy although a Navy investigation found he made inappropriate videos while serving as Enterprise's executive officer from 2006-2007.

A Navy official confirmed Roughead, the senior officer in the Navy, wrote the four-page memo because of the number of officers relieved of command for a wide variety of reasons ranging from personal misconduct to poor performance. The official said the Navy does not believe there is any one reason for the number of cases. He declined to speak on the record, citing Roughhead's memo as the public accounting of the matter.

"Authority, responsibility and accountability are three essential principles which are the heart and soul of command. Effective command is at risk if any of these principles are lacking or out of balance," Roughead said.

The Navy calculates there are more than 1,500 commanding officer jobs in the Navy and that less than 1% of the officers in those jobs have been relieved of command since 2005.