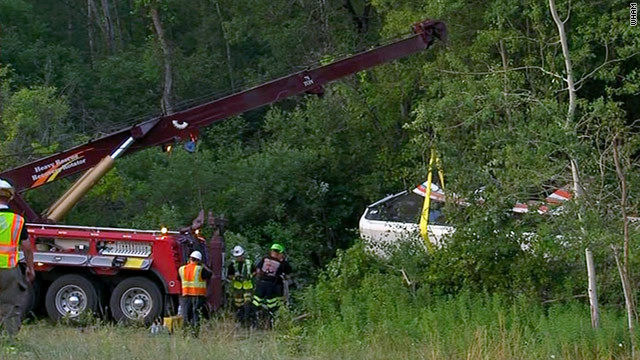 A rescue crew pulls out this bus with a crane after the bus crashed on an interstate in New York, killing two and injuring eight.
STORY HIGHLIGHTS
RELATED TOPICS

Two fatalities have been confirmed, according to New York State Police Troop E spokesman Mark O'Donnell, and many people have been taken to local hospitals with various injuries.

Video shot by CNN-affiliate WHAM showed a blocked highway packed with rescue teams, racing to get victims to ambulances and emergency vehicles. Meanwhile, the wreckage of the white tour bus could be seen through the trees on the road's shoulder. Crews were trying to pull the vehicle from the thick nest of vegetation where it had come to rest.

Initial reports indicated that a flat tire caused the driver to lose control, O'Donnell said, but added that an accident reconstruction team is on the scene to investigate the cause of the accident. It happened around 4:15 p.m. on the northbound side of Interstate 90, near the town of Cohocton in Steuben County,

The tour bus was heading to Niagara Falls. It is owned by Bedore Tours of North Tonawanda, near Buffalo. The company's website says it has been providing tours to Niagara Falls since 1950.

CNN's Stephanie Gallman and Miguel Susana contributed to this report.