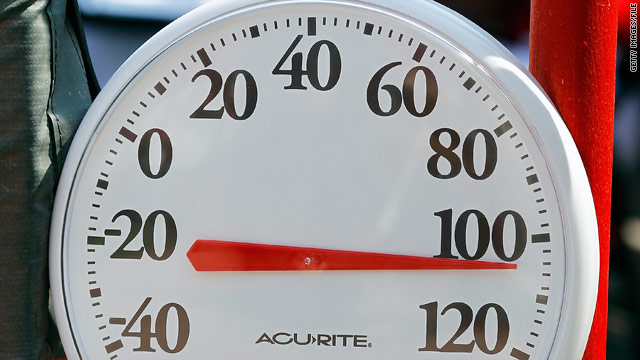 Temperatures in much of the nation's midsection will remain in the triple digits at least through the middle of this week.
STORY HIGHLIGHTS
RELATED TOPICS

(CNN) -- Much of middle America baked in a heat wave Sunday, with little respite in sight as temperatures and humidity are expected to make it feel warmer than 100 degrees Fahrenheit through much of this week.

Excessive heat warnings have been declared by the National Weather Service in at least 14 states Sunday, most of those in the upper Midwest. Excessive heat watches were in place in Indiana and Kentucky, with heat advisories (the least imminent of the three) in effect for four other states.

"This is the hottest it's been for the longest period of time," said Emily McNamara from Sioux Falls, South Dakota, where the temperatures were expected to hover in the mid-90s through the middle of the week.

The blistering weather won't end, but rather it will move east, once the alerts expire in most cases Wednesday or Thursday. Extreme heat is forecast to bear down on the eastern United States by the end of this week.

Jacob Beitlich, a Des Moines, Iowa-based meteorologist for the National Weather Service, said that two factors contribute to make this current heat wave especially dangerous: the lack of a significant drop in temperatures overnight to allow people's bodies to cool down and relatively high humidity, which makes it feel appreciably hotter than the thermostat may indicate.

In Iowa, for instance, he noted that the impact of mid-90s temperatures have been compounded by relatively high dew points in the upper 70s and low 80s. These combine to make the heat index -- a meteorological measure for how it feels outside -- spike so that it feels as hot as 126 degrees Fahrenheit, according to the weather service.

"That takes a toll on your body," Beitlich explained. "When it's more humid, it's more difficult to cool down from sweating."

The National Weather Service notes that typically extreme heat is the biggest weather-related killer in the United States, taking about 115 lives each year. That's why it and other government agencies urge people to minimize their time outdoors in periods of extreme heat, drink plenty of fluids, and keep especially close tabs on the elderly and young people.

In Missouri, for one, scores of cooling centers have been established in libraries, senior centers, schools and other sites around the state to help deal with continuously high temperatures.

At Target Field in Minneapolis, Minnesota Twins supporters stood in long lines to get water from coolers, used spray fans, wrapped wet towels on their head during a Sunday game -- anything to keep cool.

While the recent stretch has been particularly difficult, it's all part of what's been a continuously long, hot and in many cases dry summer in numerous locales. The weather service indicates that Oklahoma, for instance, already has had 27 days this year in which the temperature surpassed 100 degrees.

Not everyone, though, in the region sweat it out this weekend. McNamara notes that the Wild West Waterpark, where she is aquatic manager, has had "record-breaking days in terms of attendance" in recent days, with several thousand flooding in to get wet and beat the heat.

"It's awesome," she said. "You see people coming out having fun. It makes for a fast day."

CNN's Ted Rowlands and Jacqui Jeras contributed to this report.