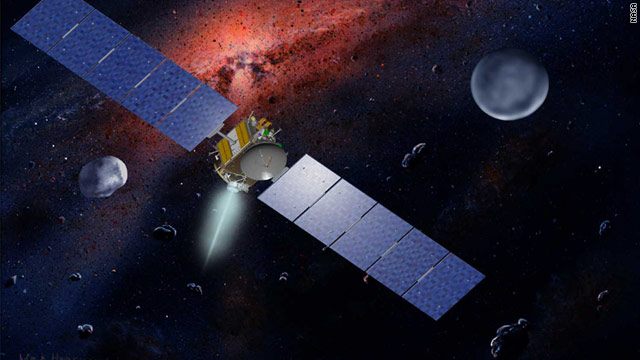 Dawn will "ease up" next to Vesta and be captured in orbit by the asteroid's gravity, NASA said.
STORY HIGHLIGHTS

(CNN) -- Atlantis, which took off last week on NASA's final space shuttle voyage, won't be the only spacecraft to make significant steps this year.

The Dawn spacecraft is scheduled to make the first orbit around two destinations beyond Earth, beginning with the asteroid Vesta on Friday and the dwarf planet Ceres by next July, NASA said.

It will be the first mission involving what scientists call a main-belt asteroid -- a ring of bodies smaller than planets that orbit the sun between Mars and Jupiter. The spacecraft will chronicle its journey by sending images back to Earth over the course of a year.

"It has taken nearly four years to get to this point," said Robert Mase, Dawn project manager at NASA's Jet Propulsion Laboratory in Pasadena, California, in a statement. "Our latest tests and checkouts show that Dawn is right on target and performing normally."

Dawn, which launched in September 2007 and has been making its way toward the main belt ever since, will "ease up" once it approaches Vesta, where it will be captured in orbit by the asteroid's gravitational pull at about 10 p.m. PT Friday (1 a.m. ET Saturday).

The observations Dawn makes will help scientists understand the earliest part of the solar system's history, according to Marc Rayman, chief engineer and mission director of Dawn's flight, in a telephone interview.

Dawn's engineers expect to hear from the spacecraft via radio signals and confirm by 11:30 p.m. PT Saturday (2:30 a.m. ET Sunday) during a scheduled communication that it performed as planned.

Dawn's radio signal will be captured by a network of radio antennas, each about 230 feet in diameter, located in California, Spain and Australia, said Rayman.

Next July, a year after its scheduled orbit with Vesta, Dawn will head toward the dwarf planet Ceres, which is 990 million miles from Vesta, according to NASA.

Ceres and Vesta are two of the largest bodies in the main belt of asteroids -- a ring of objects too small to be called planets.

Even though they are considered near each other in the solar system, Vesta and Ceres have two different compositions.

Vesta is rocky and appears to have been hot at one point; Ceres seems to contain a large amount of water beneath its surface, said Rayman.

"What we want to learn is why are these two bodies so different," said Rayman. "Studying and comparing these two should tell us more about how the planets formed."