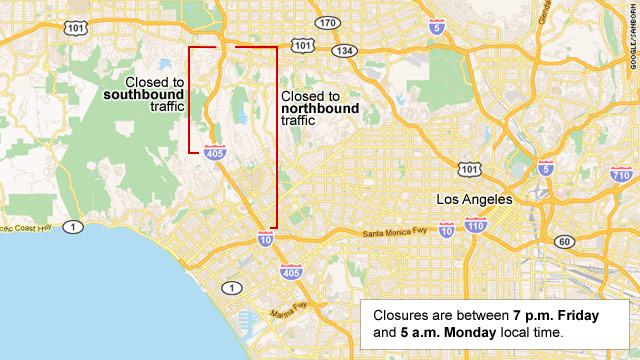 Los Angeles (CNN) -- The closure of a mountain highway pass in the heart of the nation's second-largest city -- an event anticipated to be so calamitous to car-loving Southern California that it's been dubbed "Carmageddon" -- hit the area Friday night.

At about 10 p.m. Pacific, crews began closing lanes, and by midnight, the 405 was expected to be eerily vacant -- a "carpocalypse," some say. It is expected to remain that way for about 53 hours.

The 405 is usually one of the busiest freeways in the country, carrying about 500,000 cars a day through the Sepulveda Pass, a critical artery connecting Southern Californians to destinations up the coast. The 405 achieved notoriety on national television as the corridor that former NFL player O.J. Simpson used as he was being slowly chased by police in 1994.

The highway also cuts through the west side of Los Angeles, an area that includes the high-status communities of Bel Air, Brentwood, Beverly Hills and Santa Monica.

"It doesn't have to be 'Carmageddon.' That's why we have done so much outreach to the public," the mayor said Friday.

The weekend construction project should be completed by 5 a.m. Monday, to accommodate the morning rush hour, officials said.

The $1.2 billion construction project calls for replacing a portion of a bridge at Mulholland Drive, a mountain summit road that is featured in many Hollywood films, authorities said. A year from now, crews will have to shut down the 405 again to replace a final portion of the Mulholland Drive bridge, officials said.

The project also calls for adding a car-pool lane in each direction, creating "the largest HOV system in the world" at 48.6 miles in length between the San Fernando Valley and Orange County, said Mike Miles, the California Department of Transportation's director for Los Angeles and Ventura Counties.

The two-year project will replace two more bridges, also to accommodate the widening of the 405, and will improve about two dozen on-off ramps and add 18 miles of sound-deadening walls for nearby residents, Miles said.

"This is a big project that is much needed, and it will be a great benefit to the public," Miles said.

Whether it has been overdramatized by locals in the nation's entertainment capital, the project has brought countdown clocks, traffic apps, detour maps and warnings to stay away or enjoy the weekend on the couch. Amtrak and JetBlue are offering specials to get away from it all.

"Severe traffic conditions are anticipated in local and regional areas during the weekend of the full freeway closure," Metro warns on its website.

Los Angeles International Airport is urging travelers to get there by public transit, especially rail, or to stay at nearby hotels for early morning flights.

The Los Angeles Fire Department is adding 200 firefighters so it can quickly respond to 911 calls in the areas affected by the closure, CNN L.A. affiliate KABC reported.

Of course, it may not be all bad.

Villaraigosa's Facebook page links to "405 Things to Do," brought to you by the Los Angeles Convention and Visitors Bureau.

"The 405 closure is the perfect opportunity to discover ... and rediscover ... the great activities, restaurants, shops and sites close to home in the many unique neighborhoods of Los Angeles County," the page touts. "Over the next few days leading up to the 405 closure, we will be adding 50 suggestions per day."

JetBlue is offering $4 fares each way from Burbank to Long Beach on Saturday and Sunday.

There is an app, or several, for "Carmageddon."

KABC has partnered with Waze to help navigate the traffic. "The app provides free turn-by-turn GPS navigation based on the live conditions of the road," the station said.

Celebrities are even tweeting -- cheekily -- about this weekend's affront to the Los Angeles driving experience.

Twitter titan and actor Ashton Kutcher has gotten into the act: "LAPD askd me 2tweet: 405fwy btwn 10 & 101 will b closed July16-17. In xchange I would like a free pass on that stoplight tickt IT WAS YELLOW."

When shown a copy of the tweet while he was being interviewed on CNN, the mayor laughed about the request to fix the ticket. "No, thank you, Ashton," Villaraigosa said.

For those venturing out, it's all about the proper attitude.

It suggested leaving home early, listening to calming music and news updates, or stopping at a restaurant or park for a break, if necessary.

"Avoid directing anger at other drivers, even if they are discourteous or distracted," AAA said. "Concentrate on your own driving."