Heat wave settles in the South, gives break to Northeast 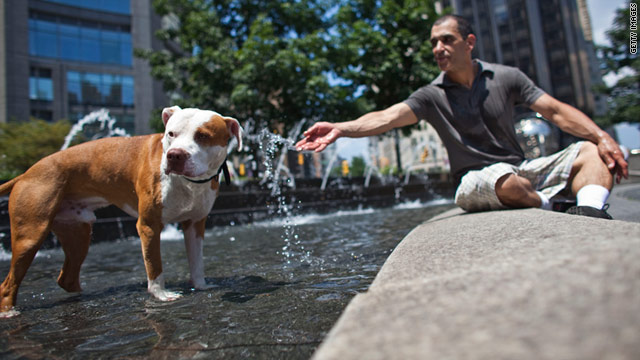 Herb Nieves and his dog cool out in the Columbus Circle fountain on Tuesday in New York City.
STORY HIGHLIGHTS

(CNN) -- A blistering heat wave retreated to the south Wednesday where it's hot enough to fry an egg, bringing some relief to the Ohio Valley and northeastern United States.

Chris McBee, a resident of Norman, Oklahoma, said he was able to fry an egg on the dashboard of his car, using just the heat of the car's interior, which was 181 degrees.

Even though it's still really hot in Oklahoma, the number of states under heat advisories has diminished to 10 -- less than half the number earlier in the week.

Dangerous heat is expected across parts of northern Texas through Thursday evening, according to the National Weather Service. Dallas, Fort Worth, Arlington and other areas will experience afternoon heat indices of 105 degrees or more through Thursday.

Memphis residents should expect a heat advisory for the rest of the week, according to the National Weather Service.

In central Oklahoma, temperatures in Lawton and Wichita Falls shot past the 100 mark for the area's 15th consecutive day of triple-digit heat Wednesday.

High demand for water amid the heat wave and problems with soil shrinking as the ground warms has resulted in burst pipes and low water pressure in Oklahoma City. This prompted officials to issue mandatory water-use restrictions for the first time in at least a decade, according to utilities department spokeswoman Debbie Ragan.

The heat has been so extreme that a portion of the Cimarron Turnpike in Pawnee County, Oklahoma, buckled on Sunday, creating a 2-foot ramp that sent a motorcyclist flying 150 feet.

In addition to the discomfort and potential danger, the heat could wreak havoc on crops, especially corn, said Chad Hart, assistant professor of agricultural economics at Iowa State University. The heat wave comes at a sensitive time for corn, he said.

"That's why markets are watching the heat wave. We're entering a period of time when corn pollinates, and so if you get a heat wave in the early to mid-part of July across Iowa, Illinois and Indiana, it can have a big impact," he said.

"The last time we had a big heat wave and drought was in 1988, and that year we saw corn production fall off by over 30% ... so if we think of where we are today with already-high corn prices, a true drought scenario can push prices to highs we've never seen before."

While record- and near-record daytime highs are being set, many areas are also experiencing record warm lows at night. For instance, the low temperature of 83 recorded early Tuesday in North Little Rock, Arkansas, set a record for the warmest low in July, Vaccaro said.

The heat has already claimed at least one victim, a 51-year-old man in Granite City, Illinois, who died Sunday because of the excessive heat, according to the Madison County coroner.

Forecasters say people should limit outdoor activity during the hottest portions of the day, wear lightweight clothing, drink plenty of water and be watchful for signs of heat exhaustion, which include heavy sweating, pale and clammy skin, weak pulse, fainting and vomiting.

Other areas of the country not under heat advisories touted record highs Tuesday.

JFK Airport and Islip, New York, did the same, reporting 97 and 93 degrees respectively, beating 1993 records of 94 degrees at JFK and 91 in Islip.