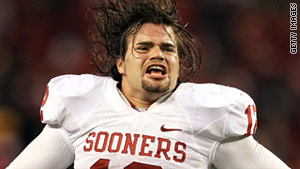 According to an autopsy report, Austin Box had five different painkillers in his system.
STORY HIGHLIGHTS

CNN affiliate KWTV has more on the story.

(CNN) -- The death of a University of Oklahoma football player was caused by multiple drugs in his system -- including five different painkillers -- at the time of death nearly two months ago, according to the state's toxicology report released Tuesday.

"It is with much sadness we look back and see that recently Austin had turned to other methods of managing his pain," said the parents of Austin Box, 22. They said they hoped others dealing with pain in a similar manner "will see this tragic accident as a message and think about the consequences."

"Our greatest regret is that Austin did not feel he could share his pain with those who loved him," his parents said.

Box was found unconscious and not breathing in an El Reno, Oklahoma, home May 19, according to a 911 tape released by CNN affiliate KWTV.

"He takes pain pills, and he's not responding to me," a voice on the tape told a police dispatcher.

Box was pronounced dead later that morning at an Oklahoma City Hospital, according to police who told KWTV.

According to the autopsy report, Box had five different painkillers in his system -- oxymorphone, morphine, hydrocodone, hydromorphone and oxycodone -- as well as alprazolam, an anti-anxiety drug.

The last few years of Box's life were full of injuries that often required surgeries, his parents said.

The most recent injury was a ruptured disc in his back in August 2010. Box was able to return to the field after recovery to help his team.

He was considered a big part of Oklahoma's late-season resurgence, according to the coaching staff, and was slated to begin his senior year as the Sooners' starting middle linebacker.

Box was "an integral part in our success the last three years and was looking forward to a big senior year," Bob Stoops, the head football coach, said in May. "As heart-wrenching as this is for us, we know it's even more difficult for his family. More than anything, our thoughts and prayers are with them."