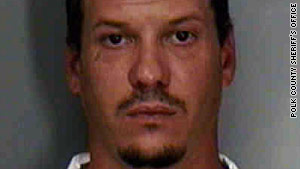 (CNN) -- Polk County, Florida, detectives arrested a man Tuesday in connection with the slaying of a priest in Mississippi.

"Mr. Manieri was one of the last people ... that we know of to see Father Everitt," said Waveland Police Chief James Varnell. "We believe that his motive is robbery."

Everitt, 70, was found dead Monday in the Dominican Retreat house in Waveland, Varnell said. He presided over the Holy Ghost Catholic Church in Hammond, Louisiana.

"This tragic loss of Father Ed's life leaves a deeply felt void in all our lives," said Bishop Robert Muench of Baton Rouge.

Everitt was spending a few days of vacation at the Waveland house, which had been rebuilt after Hurricane Katrina, said a statement from the Southern Dominican Province, an order of friars.

Everitt and Manieri had met two weeks before the death in Waveland. Everitt was going to hire Manieri to do a construction project there, Polk County Sheriff Grady Judd said.

Judd said police got a "very detailed confession" out of Manieri upon his arrest.

Sunday, Manieri and Everitt argued in the Waveland house, according to the confession, Judd said. Manieri found a firearm and shot Everitt twice. Manieri took Everitt's wallet and his vehicle, a 2011 silver GMC HHR, then called his ex-wife, Judd said.

Manieri told his ex-wife he was working on an oil rig and would take her, her son and his daughter to Disney World in Florida when he got his first paycheck, Judd said. The family left Sunday night after the homicide, stopping in Mobile, Alabama, for one evening.

Manieri and the family arrived in Polk County, about an hour southwest of Orlando, early Tuesday and stopped at a Days Inn, Judd said.

The family had planned to buy three-day passes to Disney on Tuesday, he said.

Police found the suspect by tracking Everitt's stolen vehicle, pinpointing it within 20 minutes via a GPS tracking system.

"Quite frankly, he left a trail of evidence that a blind man could've followed," Judd said.

Varnell said Manieri had a long history with the police department, including a child molestation charge in 2005, which he was convicted of in October 2006.

Judd said Manieri was booked in the Polk County Jail for Tuesday night and Waveland police could take Manieri into custody as soon as Wednesday.

"Fr. Ed was a man of great energy, both preaching and caring for others," said a statement from the Southern Dominican Province. "(He) will be profoundly missed by his blood family, his Dominican family and all whom he has served as a Dominican and priest over his many years of ministry."

A mass was held Tuesday in Hammond at 7 p.m. at the Holy Ghost Catholic Church in memory of Everitt.