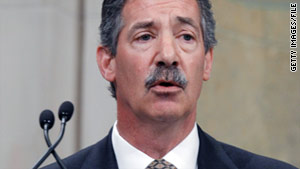 Washington (CNN) -- The federal government said Monday it is proceeding with a plan to require gun dealers in four Southwest border states -- California, Arizona, New Mexico and Texas -- to report the sales of high-power rifles under certain conditions in an effort to stem the flow of guns to Mexican drug cartels.

Critics immediately called the move an illegal expansion of gun-control laws and an effort to divert attention from the "Operation Fast and Furious" gun controversy. And the National Rifle Association said it will file suit to stop the move.

Under the new policy, gun dealers in the four border states will have the same reporting requirements for certain long guns that gun dealers nationwide currently have for hand guns. They will be required to give purchaser information to the Bureau of Alcohol, Tobacco, Firearms and Explosives (ATF) if someone purchases two or more semi-automatic rifles in a five-day period, but only if the guns are greater than .22 caliber and have the ability to accept a detachable magazine.

Deputy Attorney General James Cole said in a statement the new rule is tailored to focus on guns that "are highly sought after" by criminal organizations near the border.

The rule, he said, "will improve the ability of the (ATF) to detect and disrupt the illegal weapons transfers" from gun buyers in the U.S. to drug traffickers in Mexico and along the border.

Brady Campaign Acting President Dennis Henigan urged President Barack Obama "to do all in his power to protect this valuable new initiative from the gun lobby's inevitable efforts to attack it in Congress and the courts." He also called for stricter laws to prevent trafficking in the first place.

But critics called the action a "diversionary tactic" to take attention away from Congress's ongoing investigation into the "Fast and Furious" program, in which the ATF allowed people suspected of being straw-purchasers of weapons to sell their weapons, hoping to build bigger cases against Mexican criminal organizations.

"This political maneuver seems designed to protect the careers of political appointees at the Justice Department and not public safety," Rep. Darrell Issa, R-California, said in a statement.

"This (Fast and Furious) has become a full-blown scandal, and I think they're trying to change the subject from Fast and Furious to something else," said NRA Executive Vice President Wayne LaPierre.

LaPierre said the action defies the clear intent of Congress regarding the reporting of gun sales.

"What you've got here is the Obama administration stepping into the shoes of Congress and essentially legislating," LaPierre said. "We are immediately filing lawsuit in federal courts."

LaPierre said the NRA would file suit as soon as the ATF delivers the first "demand letter" requiring a licensee to report the sale of a long gun.

LaPierre said the new rule is "an attempt to inch President Obama's (anti-gun) agenda down the road. Once they get into four states, they'll expand it to Tennessee, Rhode Island, Wyoming. I think it's a nose in the tent," he said.

The long-gun reporting proposal pre-dates disclosures about the "Fast and Furious" controversy. The ATF first published the proposal in the Federal Register, seeking public comment, on Dec. 17, 2010, and published a second notice on April 29, 2011, requesting public comments for 30 days.

But critics said the administration moved forward with the proposal to re-frame the "Fast and Furious" debate.