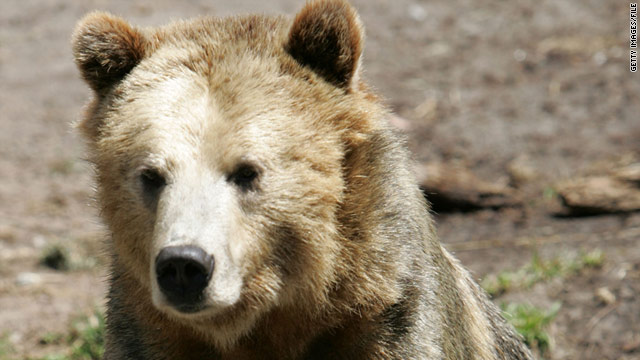 There are more than 600 bears in Yellowstone National Park ecosystem, according to park officials.
STORY HIGHLIGHTS

(CNN) -- The grizzly bear that attacked and killed a man in Yellowstone National Park acted in defense, park officials said on Thursday, adding that they have no plans to kill the bear.

The female grizzly attacked a hiker and his wife around 11 a.m. Wednesday after the couple surprised the mother with her cubs, they said.

The victim, Brian Matayoshi, 57, died at the scene. His wife, Marylyn, escaped the attack without injuries.

Park officials were adamant that the bear's reaction was defensive and that the park does not have plans to track down and kill the bear.

"This bear is not marked in any way and has never been involved in another conflict in the area," said wildlife biologist Kerry Gunther. "We average only one injury per year and they are usually not repeat occurrences by the same bear. ... it was not predatory and we see no reason to take action against the bear."

Neighbor: 'I was devastated'
RELATED TOPICS

Park Superintendent Dan Wenk said all signs indicated the Matayoshis did everything right.

"Upon seeing the bear, they began to back down the trail and when they turned to check, the bear was in full charge towards them," Wenk said.

Wenk said the bear "impacted" Matayoshi while his wife took cover behind a fallen tree. The bear approached Matayoshi's wife, lifted her off the ground, and then dropped her. She played dead and the bear left, Wenk said.

Marylyn Matayoshi's cries for help alerted other hikers in the area, who called 911. Park rangers arrived at the scene about 15 minutes later.

Brian Matayoshi had claw and bite marks from the attack. Rangers confirmed that he was dead when they arrived on the scene, Wenk said.

Wednesday's attack occurred along the Wapiti Lake Trail in the back country of the park, in northwestern Wyoming.

All trails that feed into South Rim Drive, where the incident occurred, will remain closed until park officials determine it is safe to reopen them.

Gunther said hair and DNA samples were collected from the scene so that if another incident occurs they will know if the same bear was involved.

There are more than 600 bears in Yellowstone ecosystem, according to park officials. Wenk said bears have been very visible to park visitors this year but that park officials rely on reports from hikers to determine how many bears are in the back country of the park.

Bear attacks are extremely rare -- Wednesday's attack is the first time a human has been killed by a bear in the park since 1986, according to a park press release.

This was the Matayoshis' fourth visit to Yellowstone, Wenk said. They had previously hiked the trails and never encountered a bear.

A warning sign was posted at the head of the trail because of known bear activity along access points. Wenk advised visitors to familiarize themselves with bear safety and protocol before they begin hiking.

"I advise visitors to make themselves aware of the inherent danger if they go into the back country of Yellowstone and to avail themselves of the safety information available to them," he said.