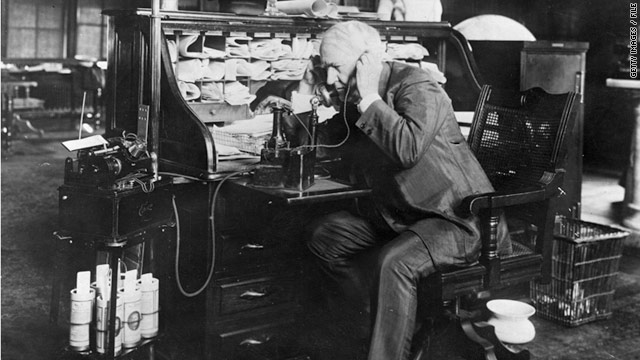 A recently recovered recording from the first-ever talking doll was produced for Thomas Edison's business venture in 1888.
STORY HIGHLIGHTS

(CNN) -- A recently recovered recording from the first-ever talking doll could also be the first-ever commercial recording, historians said after the audio was posted online by the National Parks Service Wednesday.

The 12-second recording of "Twinkle, Twinkle, Little Star," captured on a ring-shaped cylinder phonograph, was produced for Thomas Edison's failed talking-doll business venture in 1888. The recording eventually found its way to Jerry Fabris, museum curator of the Thomas Edison National Historical Park, who thought that the hopelessly bent, 123-year-old artifact was condemned to eternal muteness.

Then, a few years ago, Fabris saw engineer Carl Haber give a presentation on a new 3-D scanning technology for old records at a conference held by the Association for Recorded Sound Collections. Fabris brought the tin recording, long since separated from the rest of the doll, to the Lawrence Berkeley National Laboratory, where on May 11 Haber and another scientist successfully reproduced the audio.

"That was really exciting," Fabris said, of "arguably the first commercial recording, the earliest documented example of anyone hiring someone to make records, to perform on records, that would then be sold."

"I was hoping to hear Edison, but I was happy to hear any kind of voice," Fabris said.

Patrick Feaster, a historian of the early phonograph, added that the recording has "a number of different significances."

"This was the very first case of a professional recording for an audience -- before it had really been done only for the novelty," Feaster said. "This is the first instance of someone doing it to earn some money, and that's a pretty big first."

Still, while acknowledging Edison's invention was a breakthrough, Paul Israel, director of the Edison Papers at Rutgers University, noted that Edison's project was a commercial bust.

"While it was a very clever idea, both the doll and the recording were a bit too fragile and complicated for children to use," Israel said, adding that the recent discovery indicates that the sound from the dolls was "not terribly clear."

"You can imagine that the women making these recordings had to shout into the cylinder -- and that comes across in the (recovered audio)."

Feaster said that new technologies such as the one used by Haber were giving historians a new ability to, quite literally, listen to the past.

Fabris added that the recording marks a key moment in the history of early sound technology.

"It was an interesting time, with Edison trying to move the phonograph from a laboratory invention to the marketplace, from an invention to an industry," Fabris said. "That was always his stated goal: to invent practical things that could be useful."