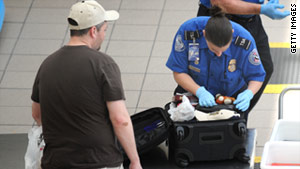 Passengers flying from overseas to the United States may notice additional security measures due to recent intelligence.
STORY HIGHLIGHTS

The idea of implanting bombs has been discussed in the past, but the United States has obtained fresh intelligence about the desire of terrorists to implant devices, according to the official.

Another U.S. official said Ibrahim Hasan al-Asiri, the top bomb maker for al Qaeda in the Arabian Peninsula (AQAP), is suspected of being behind the latest efforts.

"He's AQAP's bomb guy," said the official. Asiri is also believed to be behind the thwarted 2009 Christmas day "underwear" bomb, the failed October 2010 cargo plane bomb and an attempt to kill a Saudi prince using a concealed bomb

Both officials said there is no specific or imminent threat. But the new intelligence prompted officials last week to brief international airlines and U.S. allies overseas, a Transportation Security Administration spokesman said.

"We are treating this information seriously, and as a precautionary matter, sharing it with our colleagues overseas and of course U.S. carriers who travel overseas," TSA Administrator John Pistole told CNN. "We see this as the latest iteration or the evolution of what terrorist groups are trying to do to circumvent our security layers and to perhaps defeat our societal norms," he said.

"The information is that terrorists are aware of this type of technique and interested in using it, but there is no specific threat as to a date and time and a specific flight," he said.

The TSA said full-body scanners can not see underneath skin, but said other "overlapping layers of security" could help officials deter any plot involving a human bomb. Those layers include intelligence information about possible plots, equipment that checks for minute traces of explosives, behavior detection officers and canine teams.

"All of those layers of security gives us the strongest defense and the best opportunity to detect and deter this from happening," Pistole said Wednesday.

TSA spokesman Nicholas Kimball said passengers flying from international locations to U.S. destinations may notice additional security measures in place. Measures may include interaction with passengers, in addition to the use of other screening methods such as pat-downs and the use of enhanced tools and technologies, Kimball said.

"These measures are designed to be unpredictable, so passengers should not expect to see the same activity at every international airport," Kimball said.

A trauma surgeon contacted by CNN said terrorists could use a variety of techniques to conceal bombs in a human, ranging from crude surgery that would likely result in infections, fever and other complications, to more sophisticated procedures that would take greater skill, but could last a long time before causing problems.

Terrorists could replicate a cosmetic device, such as a breast or buttock implant, said Dr. Jack Sava, of the Washington Hospital Center. "In many types of infections after surgery, there can be a kind of honeymoon period of a few days. But once you get several days after the operation, I think that's when you'd start to see signs that would begin with pain and fever. That would get worse and worse, and ultimately be fatal if nothing were done," he said.

An aviation security consultant said news of terrorists' interest in implants shows the "continuous competition between terrorists and the defenders, where we always try to be one step ahead, and they try to do the same."

"I think we have come to the point where our technology capabilities have been exhausted to the limit, and right now there's no further technology that can be applied to mitigate this kind of risk," said consultant Rafi Ron. The TSA does not have the option of subjecting people to medical doses of X-rays to find concealed objects, he said.

"So we are very much now one step behind (terrorists), rather than one step ahead."

Ron said the TSA is right to focus more attention on airline passengers, instead of on the bags they carry.

A person with an implant bomb would likely exhibit signs of stress that could be detected by trained personnel, Ron said.

"One thing obviously is an elevated level of stress, and in (the case of a human bomb) it would probably be extreme," Ron said. "You may also see some influence of drugs to ease pain."