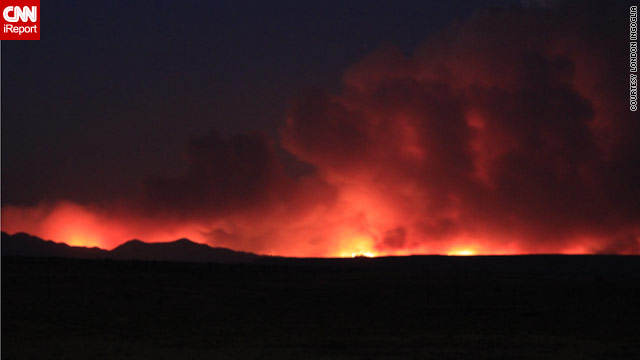 The Las Conchas fire has burned 121,000 acres and destroyed more than 100 buildings, including 63 homes.
STORY HIGHLIGHTS

(CNN) -- New Mexico homeowners who were evacuated more than a week ago will be allowed to return home Tuesday, fire officials said.

"Homeowners will be driven to their homes in government vehicles to stay," according to Reynaldo Rivera, public information officer for the Los Conchas fire.

Thousands of families in Cochiti Mesa were forced from their homes shortly after the massive fire began June 26.

On Monday, more than 2,100 firefighters were battling the wildfire that was still threatening hundreds of buildings and ancient sites on Indian lands in northern New Mexico.

The Las Conchas fire has scorched more than 123,000 acres and destroyed more than 100 buildings, including 63 homes, the federal Incident Management Team reported early Monday on its website. The fire was 19% contained, it said.

"We are not out of the woods yet," said Brad Pitassi, an incident management team spokesman for the Southwest. "This will take a long time to contain."

Weather forecasts Monday called for isolated rain showers and thunderstorms by early afternoon, with a high near 92 degrees, according to the National Weather Service. Winds were expected to be about 5 and 10 mph, the service said.

Despite improving weather conditions that were allowing firefighters to begin to get an upper hand, the federal incident team website said the fire was threatening 410 structures early Monday.

The fire also was threatening a number of ancient American Indian sites. It had burned thousands of acres on the Santa Clara Indian Reservation and had spread onto the Bandelier National Monument, home to ancient Pueblo homes, rock paintings and petroglyphs, fire officials said.

Federal agencies also warned that heavy smoke and ash was making air quality unhealthy as far away as Albuquerque, Santa Fe and Taos, and they warned the elderly, children and those with heart or lung problems to stay indoors, according to a news release from federal agencies associated with the firefight.

Most notably, Los Alamos County Police Chief Wayne Torpy announced that a majority of roadblocks across the county were being lifted, allowing roughly 10,000 residents to return home.

The evacuees' return, Pitassi said, was largely due to progress subduing flames on the southwest edge of Los Alamos. But a lot of work remains to be done, with firefighters viewing battling the blaze -- like many others like it around the region -- as "marathons, not sprints."

Investigators determined that the fire, which began June 26, was sparked after an aspen tree knocked down by strong winds struck a power line and caught fire, said New Mexico State Forester Tony Delfin. The tree then hit the ground and sparked nearby vegetation, he said.

Since starting last week, the Las Conchas fire quickly expanded into the Santa Fe National Forest and Jemez Ranger District. It spread rapidly because of strong winds, high temperatures and dry conditions that have similarly fueled dozens of other fires around the region.

The fire has engulfed much of the national forest, the Valles Caldera National Preserve and Bandelier National Park.

It also prompted the closure of Los Alamos National Laboratory. On Saturday, the state of emergency for the lab was lifted, and the lab announced that it will reopen to employees Wednesday. At no time were nuclear or hazardous materials on site threatened, the laboratory said in a statement, adding that it was moving into an "operational recovery mode."

About 20 archaeologists are also part of the firefighting effort, charged with identifying and helping minimize damage from spreading fires or suppression efforts.

At least one is assigned to each bulldozer and road grader, one of a host of measures taken to protect archaeological sites, according to the Incident Management Team. The fire already burned over many such sites in the area, which is known for its Native American history.

The Las Conchas fire is just one of dozens still burning in the United States, especially in the Southwest. Several of those are also in New Mexico, including the 10,000-acre Pacheco fire about 25 miles west of Los Alamos and the Donaldson fire near Hondo that has charred 96,745 acres and is 50% contained.

Pitassi said that a combination of "extremely dry fuels," rugged terrain, strong winds and high temperatures have led to a "record-breaking year" for wildfires in the United States -- and one that still has no clear end in sight.