Despite progress, huge fire near Los Alamos mostly out of control 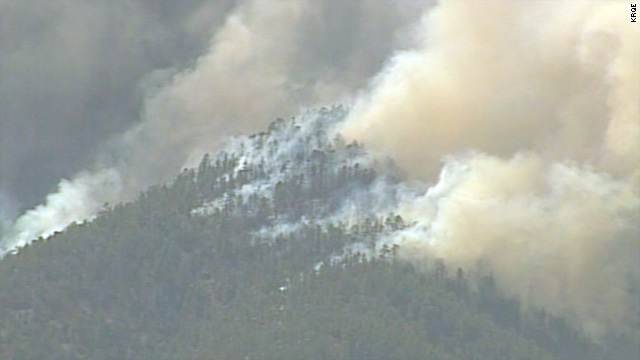 Smoke billows from the Las Conchas fire, which began on June 26 and expanded into the Santa Fe National Forest.
STORY HIGHLIGHTS
RELATED TOPICS

The Las Conchas fire scorched more than 120,000 acres and destroyed more than 100 buildings by late Sunday, the federal Incident Management Team reported on its website.

The damage has occurred in the span of one week, with New Mexico State Forester Tony Delfin announcing Sunday night that it began June 26 when strong winds knocked down an aspen tree. The tree caught fire after falling on a nearby power line, then hit the ground and sparked nearby vegetation.

Brad Pitassi, an Incident Management Team spokesman for the Southwest, stressed that the fire remains "very active," as it was only 19% contained by Sunday night.

Air conditions will be "very unhealthy" Monday because of the fire, with its ill effects felt in Albuquerque, Santa Fe, Espanola, Taos and other communities, according to a press release from federal agencies associated with the firefight. Authorities are encouraging the elderly, children and those with heart or lung disease to stay indoors.

Most notably, Los Alamos County Police Chief Wayne Torpy announced that all but two roadblocks around the county were lifted by 8 a.m. Sunday, allowing roughly 10,000 residents to come back to town. The decision was made after a positive assessment from the Incident Management Team that is coordinating the fight.

"We've been really encouraged the last 48 hours," he said.

The evacuees' return, Pitassi noted, was largely due to progress subduing flames on the southwest edge of Los Alamos. But a lot of work remains to be done, with firefighters viewing battling the blaze -- like many others like it around the region -- as "marathons, not sprints,"

"We are not out of the woods yet," Pitassi said. "This will take a long time to contain."

Since starting last week, the Las Conchas fire quickly expanded into the Santa Fe National Forest and Jemez Ranger District. It spread rapidly due to strong winds, high temperatures and dry conditions that have similarly fueled dozens of other fires around the region.

The fire has since engulfed much of the national forest, the Valles Caldera National Preserve and Bandelier National Park.

It also prompted the closure of Los Alamos National Laboratory. On Saturday the state of emergency for the lab was lifted, and the lab announced Sunday that it will reopen to employees Wednesday. At no time were nuclear or hazardous materials on site threatened, the laboratory said in a statement, adding it was moving into an "operational recovery mode."

More than 2,100 personnel are battling the fire, with 81 fire engines, 30 water tenders, 18 helicopters and eight bulldozers also being utilized in the effort.

Some 20 archaeologists are also part of the team, charged with identifying and helping to minimize damage from spreading fires or suppression efforts. At least one is assigned to each bulldozer and road grader, one of a host of measures taken to protect archaeological sites, according to the Incident Management Team. The fire already burned over many such sites in the area, which is known for its Native American history.

Citing National Weather Service forecasts, Pitassi said temperatures in the fire zone were expected to peak between 80 and 90 degrees "over the next day or so." Humidity was expected to be between 18% and 26% Sunday before rising slightly over the next 24 hours. Winds will be between 3 to 15 mph, except in deeper canyons where they could blow as fast as 25 mph.

While one of the largest and least contained currently, the Las Conchas fire is just one of dozens still burning in the United States, especially in the southwest. Several of those are also in New Mexico, including the 10,000-acre Pacheco fire about 25 miles west of Los Alamos and the Donaldson fire near Hondo that has charred 96,745 acres and is 50% contained.

Pitassi said that a combination of "extremely dry fuels," rugged terrain, strong winds and very warm temperatures have led to a "record-breaking year" for wildfires in the United States -- and one that still has no clear end in sight.