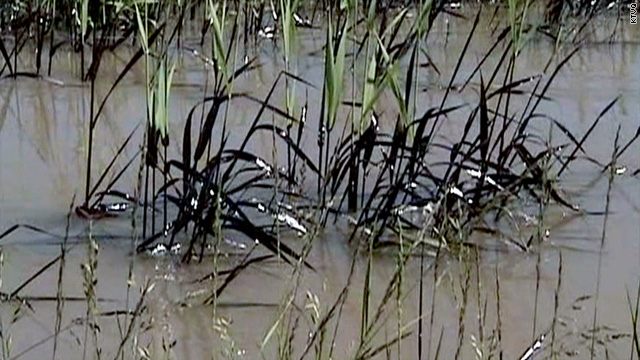 The leaked oil floats in pools caused by recent flooding around the Yellowstone River.
STORY HIGHLIGHTS

(CNN) -- High water and a swift current has helped break up an oil spill that dumped hundreds of barrels of crude into Montana's Yellowstone River over the weekend, local officials said Sunday.

ExxonMobil said between 750 to 1,000 barrels (32,000 to 42,000 gallons) of oil escaped late Friday when a pipeline ruptured beneath the river near Billings. Some of the of the oil has washed ashore or formed pools of "milky brown" residue in river eddies, Yellowstone County Sheriff Mike Linder said.

But Linder and Duane Winslow, the county's emergency services director, said flooding has made it harder to track and clean up the mess. The Yellowstone was running above flood stage over the weekend, sweeping brush and logs into the river, and had a 5- to 7-mph current Sunday.

"It's too dangerous to do anything on the river, to put out any sort of boats or anything," Winslow said. "So people will be working from the shores rather than out in the middle of the river."

The spill was discovered late Friday night near Laurel, west of Billings and about 100 miles downstream from Yellowstone National Park. The pipeline feeds an ExxonMobil refinery in Billings, and the company said it had shut down the line within minutes.

"We will stay with the cleanup until it is complete, and we sincerely apologize to the people of Montana for any inconvenience the incident is creating," Gary Pruessing, the president of ExxonMobil's pipeline subsidiary, said in a statement issued Sunday.

There were no reports of wildlife being endangered by the spill, Tim Thennis, who is leading the response for the Montana's Disaster Emergency Services agency, said Sunday.

The spill forced the evacuation of more than 200 nearby residents after it was discovered Friday night, but they were allowed to return Saturday morning. Laurel rancher Lloyd Webber said the spill left a "pretty heavy" smell of oil hanging over the area Friday night as he and his wife left their home.

"We went to the Perkins in Billings and drank coffee for two or three hours, then went back," said Webber, who lives about a half-mile from the river.

The Yellowstone is one of the tributaries of the Missouri River, which it joins in neighboring North Dakota. Thennis said state agencies, the federal Environmental Protection Agency and ExxonMobil are working together to clean up the spill.

CNN's Matt Smith and Joe Sutton contributed to this report.