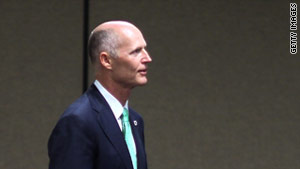 (CNN) -- A controversial law requiring adults applying for welfare assistance to undergo drug screening has gone into effect in Florida.

Saying it is "unfair for Florida taxpayers to subsidize drug addiction," Gov. Rick Scott signed the legislation in June.

Under the law, which went into effect on Friday, the Florida Department of Children and Family Services will be required to conduct the drug tests on adults applying to the federal Temporary Assistance for Needy Families program.

The aid recipients would be responsible for the cost of the screening, which they would recoup in their assistance if they qualify.

Those who fail the required drug testing may designate another individual to receive the benefits on behalf of their children.

And the ACLU has filed suit against the state for requiring all state workers to take a drug test and is considering suing the state for drug-testing welfare applicants.

Controversy over the measure was heightened by Scott's past association with a company he co-founded that operates walk-in urgent care clinics in Florida and counts drug screening among the services it provides.

In April, Scott, who had transferred his ownership interest in Solantic Corp. to a trust in his wife's name, said the company would not contract for state business, according to local media reports. He subsequently sold his majority stake in the company, local media reported.

Florida is not the first state to pass such legislation. Michigan passed a similar law that the 6th Circuit Court of Appeals found unconstitutional in 2003 since it violated the U.S. Fourth Amendment, which protects citizens against unreasonable search.

The court said the law would set a dangerous precedent by allowing the government to conduct drug searches for the safety of the public without prior suspicion.