In a move to increase the contest's fame, Nathan's is sponsoring separate male and female competitions, in effect setting the plate for Thomas, a Burger King manager who reigns supreme among female hot dog eaters, to finally capture her own championship belt. It is pink, unlike the men's mustard yellow belt, to promote Pepto Bismol, another event sponsor. Male and female contestants will vie for equal purses of $20,000.

The annual display of conspicuous consumption is a marketing marvel that captivates the media and has propelled Nathan's Famous to seven consecutive years of higher revenues and profits. During its most recent fiscal year, Nathan's sold about 453 million hot dogs, a 93% increase during the seven-year span, giving it bragging rights as the No. 1 selling beef hot dog at retail outlets across the United States. The company, which is public, has seen its shares rise three-fold during the same period.

"This is one of the greatest marketing stunts ever, ever put forth in the United States," proclaimed Wayne Norbitz, president and chief operating officer of Nathan's Famous. "It's been a great marketing strategy for us."

So great the July Fourth hot dog eating contest and more than a dozen qualifying matches around North America comprise the majority of Nathan's Famous marketing budget. The company airs no television commercials. 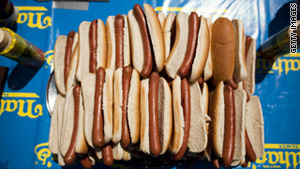 During its most recent fiscal year, Nathan's sold about 453 million hot dogs.

The hot dog eating contest is a natural for Nathan's, which first opened by the fun-filled amusement park 96 years ago. In the late 1970s the contest was just another Coney Island sideshow, thought up by PR stunt man Max Rosey.

Norbitz, a young Nathan's employee in 1977, remembers creating the competition with Rosey in front of the Coney Island restaurant.

"We waited for a couple of fat guys to walk by. We asked if they wanted to eat hot dogs in a contest. They said yes. We ran a quick little contest and the whole object was to get a photo in the New York Post," recalled Norbitz.

Rosey's protégé, George Shea, his brother Richard Shea and partner David Baer are the marketing mavens who have brought competitive eating -- or gastric-centered sports, as they like to call it -- into the modern era.

The marketers introduced the coveted mustard yellow championship belt, arranged for ESPN to telecast the competition live, built up the rivalry between former champion Takeru Kobayashi and current champ Joey Chestnut, and have promoted the "eaters" as professional athletes.

"It's absolutely a sport and it has the attendance of a sport, and these guys are athletes for sure," claimed Richard Shea.

"The MLE circuit goes on all year and hits all kinds of towns, markets and various foreign shores," said Richard Shea, who said he believes his marketing technique breaks through the clutter of traditional advertising and public relations. "There's so many things you can make competitive, compelling, and then use those as a platform for all these brands looking for eyeballs."

This year's lead stunt for the Sheas is an effort to create a rivalry between the United States and China by bringing Chinese eaters to Coney Island for the July Fourth contest, just when Nathan's happens to be embarking on a major expansion in China. The company recently concluded a deal with a franchisee who plans to open 80 Nathan's Famous outlets in China.

"They represent a potential threat to our possession of the mustard belt," warned George Shea. "China is expanding and rising as a political and global power, economic and otherwise. If they take the belt it's going to hit us right where we breathe. They are going to be eating our lunch, literally."

Champion Joey Chestnut appeared to take Shea's claim seriously. At Friday's weigh-in he confronted one of the Chinese eaters, asking, "How many are you going to eat?"

A clearly relieved Chestnut then offered sportsmanlike encouragement, "Next year you'll eat more." The record holder then confessed he could use some tough competition. "If someone's not pushing me it's hard," he said.

It appears unlikely Chestnut will have that motivation at the big table in Coney Island. While the Nathan's competition is under way in Brooklyn, Chestnut's chief nemesis Kobayashi plans to stage his own hot dog eating performance at a bar in Manhattan. He was banned from the Nathan's event last year after a contract dispute and then arrested after trying to jump onto the Coney Island stage, generating even more publicity for the eating contest and for Nathan's Famous.