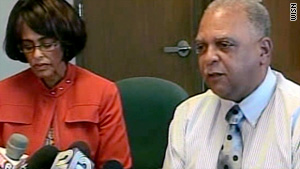 (CNN) -- Milwaukee teachers are offering meals and moral support to 354 fellow educators who will be laid off effective Friday, a union leader said.

Milwaukee Public Schools said Wednesday the layoff of 519 staff members, including the teachers, was necessary because of $84 million in state cuts and the system's efforts to control costs.

Bob Peterson, president of the Milwaukee Teachers' Education Association, said Thursday that the group opposes Thornton's appeal for members to contribute 5.8% annually to their pensions.

Teachers have already made concessions that will save the school district $94 million over two years, he said. They contributed toward health care and agreed to a pay freeze for a portion of a four-year contract, according to Peterson.

Peterson, who argued teachers have been wrongly vilified, lashed out at Walker.

"We teachers did not create the economic mess we are in," he said.

Anticipating the state cuts and the end to about $100 million in federal stimulus funding, the district cut school summer options and froze all "noncritical" building maintenance, Milwaukee Public Schools said on its website. Besides the 519 layoffs, the system will not fill about 500 open positions.

About 71% of the system's budget goes for salaries and benefits, St. Aubin said.

"We need high-quality teachers (in order) to succeed," Peterson said. Part of that, he argued, includes adequate compensation packages.

The union president said his group is committed to quality teaching and supports a peer program to help educators improve.

Peterson said he, too, would like to see Milwaukee's business community consider making contributions.