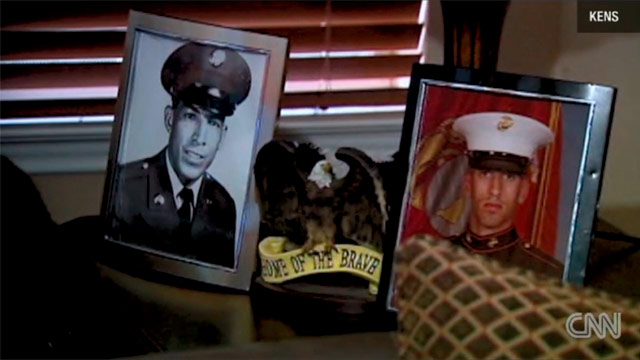 (CNN) -- The home video from Marine Lance Cpl. John F. Farias held little back from his parents about the dangers of fighting in Afghanistan, about how the experience was changing him and about how much he missed his family.

"I'm starting to change a lot. I'm kind of forced to grow up here," Farias said in the first video he sent home to New Braunfels, Texas, since deploying in April to southern Afghanistan's volatile Helmand province.

They were among his final words for his family. Farias was one of two Marines killed during combat operations in the province Tuesday, the Department of Defense said.

Home and Away: Tributes to Farias

The deaths of Farias, 20, and Lance Cpl. Mark R. Goyet, 22, raise the death toll to at least 18 Marines killed this month in combat in Afghanistan, primarily in the southern provinces, according to an analysis of Department of Defense figures.

Southern Afghanistan's Helmand province has been the scene of fierce fighting following the poppy harvest, which has seen Taliban forces launch attacks against NATO troops.

Farias detailed some of his experiences for his parents, telling them about firefights that lasted between four and six hours. He told them about his fellow Marines, his buddies, asking that they "keep them in their prayers."

Just weeks from turning 21, Farias sounded older than his years. He talked about the experiences in "my short 21-year life."

"He is self-confident. He is assertive," Farias' father, Felix, said of his son's tone and appearance in the video. "He has matured, yes."

Farias' father alternated between present tense and past tense as he recalled his son's achievements during an interview with CNN, struggling with the realization that his son had been killed.

Farias joined the Marines in August 2009, enlisting as a private first class because he had earned the rank of Eagle Scout -- the highest rank in the Boy Scouts of America.

With a backdrop of a blue Afghan sky, Farias told his family in the video that he "kind of took a look back at my life" in recent months and was taking on more responsibility in his life.

Farias' mother, Penny, flew to Dover Air Force Base in Delaware on Wednesday to be on hand when her son's body arrived from Afghanistan. His father was scheduled to fly to the base as early as Thursday to escort his son's body home.

"I'm flying with him. I'm bringing my boy home," he said.

Meanwhile, the video has become a gathering point for Farias' extended family, who began arriving at the Farias' New Braunfels home within hours of hearing of his death.

Everyone who comes to the house watches the video.

But Felix Farias, who watched it twice after it arrived, can't bring himself to look at it now.

"It's too hard for me to watch it now knowing he will never come home," the father said.

But someday, he says. Someday he will watch it again, watch the son he calls "my biggest hero."