Milwaukee schools to lay off 354 teachers 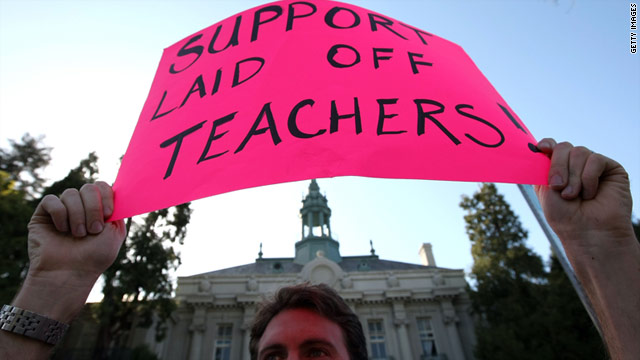 Cash-strapped state and local governments will soon shed up to 110,000 jobs, many of those belonging to teachers.
STORY HIGHLIGHTS

(CNN) -- In a budget-cutting move likely to be echoed around the country, Milwaukee Public Schools said Wednesday it will lay off 519 staff members -- including 354 teachers -- because of $84 million in state cuts and the system's efforts to control costs.

The layoffs are effective Friday, the beginning of the third quarter, when cash-strapped state and local governments are forecast to shed up to 110,000 jobs, according to IHS Global Insight.

Thornton said he was "extremely troubled" that most of the affected teachers are in elementary schools.

"Children are being caught in the middle," Thornton told reporters. "They deserve better."

Anticipating the state cuts and the end to about $100 million in federal stimulus funding, the district's own budget cut school summer options and froze all "noncritical" building maintenance, Milwaukee Public Schools said on its website. Besides the 519 layoffs, the system will not fill about 500 open positions.

At a news conference, Thornton repeated his call for members of the the Milwaukee Teachers' Education Association to contribute 5.8% annually to their pensions.

The union did not return a message left by CNN Wednesday evening.

About 71% of the system's budget goes for salaries and benefits, St. Aubin told CNN.

Though tax revenue is starting to rise, states continue wrestling with multibillion-dollar budget gaps. Federal stimulus funds helped minimize job cuts until now, but that money essentially runs out on June 30. Property tax assessments have plunged in many areas.

So states are planning to slash funds for education, social services and local governments, as well as downsize their payrolls even more in the coming fiscal year.

Teachers and school staff will bear the brunt of the layoffs this summer, as tens of thousands will likely be laid off around the nation. The national job numbers should reflect the hit in July and September.

In April, the Detroit Public Schools district sent layoff notices to all its 5,714 teachers, saying it must determine its staffing needs amid a drop in enrollment.

A $66 billion budget approved Wednesday by the New York City Council prevented 4,000 teacher layoffs. As part of the deal, 2,600 retiring teachers will not be replaced. Opponents say that will lead to bigger class sizes, according to CNN affiliate NY1.