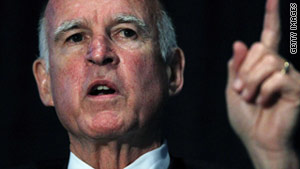 (CNN) -- Both chambers of the Democrat-controlled California legislature are scheduled to vote Tuesday afternoon on a budget deal to reduce the state's staggering $26 billion deficit to $5 billion, officials said.

Alicia Trost, spokeswoman for Senate President Pro Tem Darrell Steinberg, said Tuesday that the cuts are sure to cause pain.

Steinberg, a Democrat, said the plan would cuts billions for children, the sick and the elderly. "This (proposed) budget is the most austere fiscal blueprint California has seen in a generation," he said this week.

Brown also said the budget plan contains "tough decisions." But he added: "We have a very good plan for the budget."

Still, the budget plan projects a $5 billion deficit, Trost said. In March, legislators reduced the state's $26 billion deficit to $20 billion, and this week's measure would reduce it to the $5 billion project, she said.

But if the recession-stressed economy falters and those revenues don't materialize over the next year, additional cuts will be enforced -- including eliminating a week from the school year and cutting the state funding for local school busing programs, Trost said.

Democrats are confident that the budget will be approved Tuesday because the party controls both the Assembly and the Senate, and under a voter-approved measure last year, legislators can now pass a budget with a simple majority -- no longer needing a two-thirds majority, Trost said.

The governor, who's a Democrat, would be expected to sign the budget plan this week.

Republicans are criticizing the budget measure. They had sought a spending cap, public pension changes and regulatory reform. Democratic leaders said both parties couldn't agree on a budget, so over the weekend in the governor's office, the Democrats drafted the plan now scheduled for a vote Tuesday, Trost said.

The proposal is a shift for Brown, who has said for months that the state's $26 billion budget gap should be addressed with a mix of spending cuts and extensions on taxes that are scheduled to expire Friday. He also was determined to fulfill his pledge to put the extension of personal income and sales taxes before the voters.

But Brown could not convince four Republicans to join him so he could get the tax extension on the ballot this fall. A budget containing a tax hike needs the support of two-thirds of lawmakers.

Still, Brown and fellow Democrats plan to put a tax measure on the ballot in November 2012 through a voter initiative -- bypassing the requirement for Republican consent -- and those funds would address the remaining deficit, Trost said.

In their criticism, Republicans accused the Democrats of being compromised by special interests such as public employee unions.

"While Democrats may still use legally questionable maneuvers to raise taxes, the simple truth is because of Republicans' resolve, temporary tax increases will expire this Friday and the average California family will save nearly $1,000 per year," said Assembly Republican Leader Connie Conway.

"Californians deserve a government that understands that money belongs to the people, not the government," she said. She added that Republicans' "steadfast opposition to higher taxes has helped remind Sacramento tax-and-spend liberals of the need to live within our means."

The latest proposal was put together less than two weeks after Brown vetoed a budget approved by the legislature, saying it was chock full of gimmicks and contained legally questionable maneuvers.

Lawmakers had raced to pass a spending plan by June 15 to meet a voter-imposed deadline that required the legislature to pass a balanced budget or forfeit their pay.

However, state controller John Chiang determined that the budget was actually unbalanced. So lawmakers, who earn $95,291 a year and $142 per diem for each day they are in session, have gone without pay since mid-month.