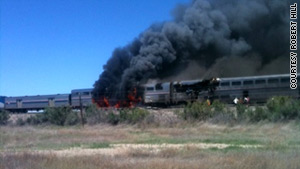 At least two people are dead after a collision involving a train and tractor-trailer in Nevada on Friday.
STORY HIGHLIGHTS
RELATED TOPICS

Amtrak said Friday it had reports that at least one passenger, an Amtrak train crew member and the operator of the truck died. The National Transportation Safety Board would not comment on the death toll Saturday.

It was not immediately clear how many people were injured when a tractor-trailer slammed into the Chicago-to-California Amtrak passenger train at a railroad crossing near Lovelock, Nevada.

Amtrak said that numerous people aboard the train had been taken to area hospitals for treatment.

Amateur video taken after the crash showed huge plumes of black smoke billowing from the train as a fire burned. Passengers and crew members stood outside.

One voice on the video can be heard telling people to get away from the smoke. Another tells a woman, out of view, to "hang and jump." A third voice asks someone, "Are you OK?"

"Next thing I know, we get hit by something. A big ball of fire comes in. I jumped out the window," passenger Justin Rhine told CNN affiliate KOLO-TV in Reno. "I saw people flying on the other side of the train."

The National Transportation Safety Board dispatched investigators within hours of the accident, the agency said. The NTSB has scheduled a press briefing for 9:30 p.m. PT. Saturday. Spokesman Nicholas Worrell declined to comment on the case before then.

The truck struck the train, which was on its way to Emeryville, California, at 11:20 a.m., Amtrak said in a statement. The train was carrying 204 passengers and 14 crew members, the company said.