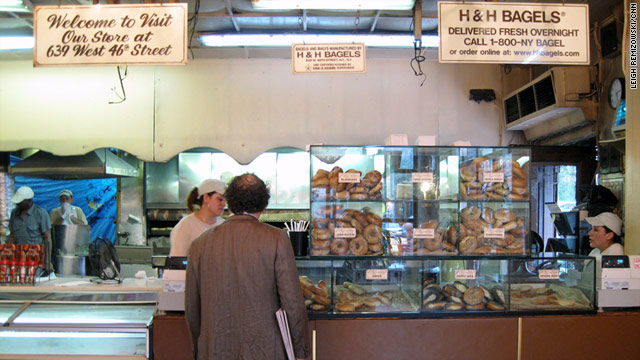 H&H Bagels will close its doors after 39 years of business in Manhattan.
STORY HIGHLIGHTS
RELATED TOPICS

New York (CNN) -- In a city celebrated for its "cawfeee" accent and doughnut-shaped rolls, the store that by many accounts is New York's bagel-lovers' paradise is set to shutter its doors.

H&H Bagels -- a Manhattan landmark of sorts -- will sell its last homemade dozen and close on Sunday, according to Moshe Fintz, the company's business manager.

The store's no-frills business model and doughy circles earned a cult-like following over its 39-year history on 80th Street and Broadway.

Many loyal customers aren't taking the news of the closing lightly.

"We have to preserve what's unique about New York," said James Besser, a pianist from Manhattan's Upper West Side.

"And what's distinct about us here is the bagels."

The store's owners have been battling financial woes for some time, said Fintz, who said they're being evicted after a tough year marred by tough economic times and a bankruptcy filing in March.

He said skyrocketing food prices and increasing rent have made it impossible to keep the store open.

But fear not bagel lovers: H&H has a second location on West 46th Street that will remain open.

The famed bagel shop may be best known outside New York for its stint on the NBC sitcom "Seinfeld," when it served as the employer of the show's eccentric Cosmo Kramer, played by actor Michael Richards.

Still, city dwellers and others often know H&H for its classic creations, baked fresh by the thousands behind a counter where they're sold.

Not true. A rival shop with the store's name sits on the borough's east side, selling sandwiches and other treats that it's west side counterpart doesn't.

The bagels -- priced individually at $1.40 -- speak for themselves, regulars say.

"They have the crunchy thing going on on the outside and are nice and soft on the inside," said Keely Mills, 28, who lives nearby and says she will mourn the loss of her poppy-seed bagel fix.

Long heralded as bagel royalty of The Big Apple, many New Yorkers insist the H&H brand is second to none.

Irwin Shlafman, the owner of Fairmount Bagel in Montreal, says the bagels of his third-generation shop speak for themselves.

"Our bagel bakery is famous all around the world," he said, touting a boiling process with honey-infused water that sets his bagels apart and gives them that "Montreal-style."

Back in the United States, Michael Wagner, a fifth-generation baker and owner of South Street Philly Bagels in Philadelphia, said it's the water that makes the difference.

"The taste is different because the water tastes different everywhere."

And yet a key ingredient to bagel folklore is simply neighborhood loyalty, he added. "It's the phenomenon known as 'where you grew up'."

For many New Yorkers, H&H has been their neighborhood preference.

The storefront's signature red and white awning has been taken down and a handful of employees are distributing fliers that notify customers of the impending closing.

But in the midst of the shop's final days, employees say they have received supportive letters and phone calls from bagel-loving residents long accustomed to the famous store.

"I had no idea how devoted people were," Fintz said.

Ron BelBruno, 47, is one such devotee.

He says he's been frequenting H&H since 1980, and despite no longer living in the neighborhood, he still stops in several times a week.

"This is horrible," said the long-time customer, who added that the loss is the latest blow to a series of "mom-and-pop" stors across the city.

"(H&H) is the epitome of New York," BelBruno added. "What's going to go here now? A Bank of America? A Duane Reade?"

Regardless of what replaces the iconic store, the most perceptible change could be the loss of a familiar yeast scent on the 80th Street block of Broadway.

"The thing I'm going to miss the most is the way it makes the neighborhood smell," said local resident Mills.