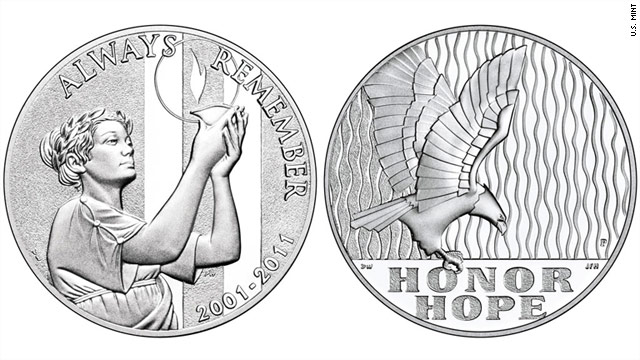 The one-ounce silver medals went on sale Monday at $56.95 each. After August 18, the price will rise to $66.95.
STORY HIGHLIGHTS
RELATED TOPICS

New York (CNN) -- Officials from New York and the United States Mint unveiled the 9/11 National Medal on Monday just three months before the 10th anniversary of the September 11 terrorist attacks.

The one-ounce silver medal's heads side features Lady Liberty with the inscription "always remember 2001-2011," while the reverse side portrays an eagle against the backdrop of cascading water.

"The medal we present to the American public today has been created by the United States Mint to commemorate September 11, 2001, a day that changed our Nation and world forever," United States Treasurer Rosie Rios said at the unveiling. "This medal's design is intended to exalt the memory of those that sacrificed their lives or were injured, and the families who continue to show dignity and strength in the face of terrible loss," she said.

The U.S. Mint will produce up to 2 million medals, according to a press release.

The medal, which went on sale Monday, is available at an introductory rate of $56.95 through August 18, after which the price will go up to $66.95. A $10 surcharge collected from the sale of each medal will to go to the National September 11 Memorial & Museum.

The 9/11 Memorial Preview Site, which held the unveiling, includes "models, renderings, films and real-time images of construction so that visitors can understand the plans and progress" of the National September 11 Memorial & Museum, according to its website.