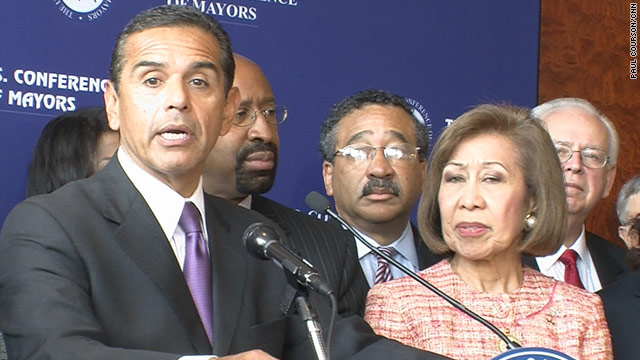 Baltimore (CNN) -- Acknowledging it is out of the ordinary for city mayors to take a stand on military policy, the U.S. Conference of Mayors passed a resolution Monday calling for an early end to the conflicts in Afghanistan and Iraq.

"This is not a war resolution," said the newly elected president of the group, Democratic Los Angeles Mayor Antonio Villaraigosa.

"What we wanted to make clear," he told reporters afterward, is that "the best way to support and honor those troops is to give them a job when they come back home."

The outgoing president of the Conference of Mayors, Republican Elizabeth Kautz of Burnsville, Minnesota, said the resolution is simply "calling on Congress to redirect military spending to domestic priorities."

But dissenting mayors said the resolution might send the wrong message, and one called for it to be withdrawn before the group could vote.

Blitzer's Blog: Getting out of Afghanistan

Peter Lewis, the nonpartisan mayor of Auburn, Washington, told his colleagues that "making political statements in this forum about the war, I do not believe is proper."

The Conference of Mayors last addressed American military policy when it called for an end to the U.S. war in Vietnam, and some mayors expressed concern that the current resolution could be taken badly by the troops now deployed.

"Let's not go and make the mistakes another generation did," Lewis said. "So I urge that this resolution be defeated."

Other mayors pushed ahead, saying there are economic problems in the United States with a more pressing priority than the massive spending on the conflicts in Afghanistan and Iraq.

"This one does not call for an immediate withdrawal," said the Democratic mayor of Madison, Wisconsin, Paul Soglin, "but it calls for speeding up the effort to end this war."

"We are at a point where municipalities are faced with cuts in services that affect all of our citizens, especially those that are in need the most," he said.

Mayors then proposed and approved amendments changing the wording to express support for U.S. troops and acknowledging what was called the need for a strategic, stable pullout of American forces. With those changes, the mayors then approved their resolution with a call to "bring these U.S. war dollars home."

As read by the parliamentarian, this is the amended resolution passed by the U.S. Conference of Mayors:

Calling on Congress to redirect military spending to domestic priorities

-- Whereas, every member of the United States Conference of Mayors and the Americans they represent support our brave men and women and their families; and

-- Whereas, the drawdown of troops should be done in a measured way that does not destabilize the region and that can accelerate the transfer of responsibility to regional authorities; and

-- Whereas, the severity of the ongoing economic crisis has created budget shortfalls at all levels of government and requires us to re-examine our national spending priorities; and

-- Whereas, the people of the United States are collectively paying approximately $126 billion per year to wage war in Iraq and Afghanistan; and

-- Whereas, 6,024 members of the U.S. armed forces have died in these wars; and at least 120,000 civilians have been killed in Iraq and Afghanistan since the coalition attacks began.

--Now, therefore, be it resolved, that the U.S. Conference of Mayors supports efforts to speed up the ending of these wars; and

-- Be it further resolved, that the U.S. Conference of Mayors calls on the president and the U.S. Congress to end these wars as soon as strategically possible and to bring these war dollars home to meet vital human needs, promote job creation, rebuild our infrastructure, aid municipal and state governments, and develop a new economy based upon renewable, sustainable energy.