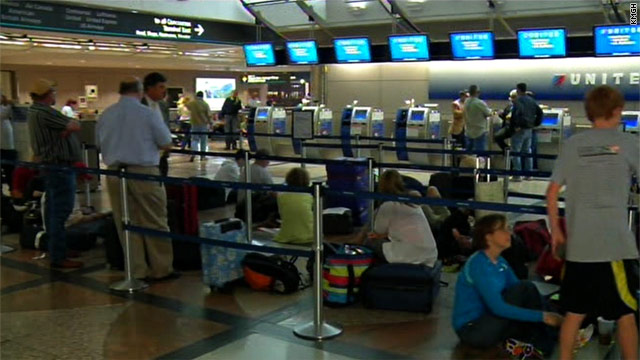 (CNN) -- A computer problem that grounded United Airlines flights across the country has been repaired, the airline announced early Saturday.

The problem, "was resolved through troubleshooting procedures and restored at midnight," wrote United Airlines spokesman Charles Hobart in an e-mail to CNN.

"The airline issued a waiver policy permitting customers on affected flights to cancel or rebook their itineraries without penalty," Hobart said. "United apologizes for the disruption caused to travelers at affected airports and is re-accommodating travelers where necessary."

The computer malfunction brought United's system of scheduling departures, reservations and processing passengers to a halt at airports across the United States. The problem left passengers stranded for hours in grounded planes, airport lobbies and security lines.

Michael Goldenthal, who was on an airplane at O'Hare when the problem occurred, said it became apparent something was wrong as the flight was taxiing.

"We were on the runway when the pilot came on the P.A. and said they had lost contact with the company computer system which measured the weight of the plane," Goldenthal said.

Goldenthal said the aircraft taxied around for nearly an hour and then returned to the gate for additional fuel. But passengers were not allowed to get off.

Long lines of people could be seen at airports in cities across the country, including Los Angeles, San Francisco and Denver. Many passengers sat on the floor as they waited.

Chris Hou and his wife, Jennifer, became stranded at Los Angeles International Airport while waiting on a connecting flight to Denver.

"We're pretty easy going people. We travel a lot. We understand that problems happen," Chris Hou told CNN. "I just think there would be a little more information. All they say is 'we have a computer problem.' By the time you get to hour three, it gets a little frustrating."

Hou told CNN less than a hour later that he and his wife were about to board a plane to Denver.