Gabrielle Giffords arrives in Tucson for weekend visit to hometown 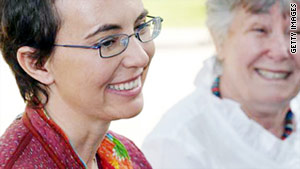 Rep. Gabrielle Giffords will not make public appearances during her visit.
STORY HIGHLIGHTS

(CNN) -- U.S. Rep. Gabrielle Giffords touched down in her hometown of Tucson, Arizona, on Friday to see her family for the weekend, according to her congressional office.

"Gabrielle and Mark are looking forward to a beautiful weekend," her office posted on Twitter.

Giffords was released from TIRR Memorial Hermann in Texas this week to begin outpatient rehabilitation, and the visit is her first to Arizona since January, her office said in a statement.

"For five long months, Gabby has been living and working in the rehab facility in Houston," said her husband, Navy Capt. Mark Kelly. "Now that she is an outpatient, her first priority is coming home to the place that is such a source of strength for her."

Giffords will not make any public appearances or grant any interviews during the visit, her office said.

"We've been dreaming of this trip for some time," Kelly said. "Gabby misses Tucson very much, and her doctors have said that returning to her hometown could play an important role in her recovery."

Giffords was shot in the head January 8 in a mass shooting in Tucson that left six people dead.

She was sent to the Houston facility January 21 to undergo intense rehabilitation. She was released Wednesday to go through outpatient therapy.