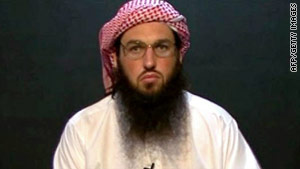 Washington (CNN) -- A potential hit list suggesting individuals in U.S. government, industry and the media was posted on jihadi Web forums, according to an FBI intelligence bulletin obtained by CNN.

The FBI document was dated June 8 and says "while the information posted was detailed, it appears aspirational in nature and it is unknown whether the threat will progress beyond discussion" on the Internet.

The bulletin says forum members posted the names of more than 40 people and included photographs for 26 of the suggested targets. The FBI noted there has been an uptick in postings on jihadi sites since Osama bin Laden's death during a U.S. military raid but said this list has "the most target specific threat postings" since his demise.

The FBI said the list was spurred by a June 3 video featuring American-born al Qaeda propagandist Adam Gadahn "in which he encourages acts of individual jihad." The first Web post made note of Gadahn's call for assassinations. That led other forum members to start suggesting possible targets.

The man now at the helm of al Qaeda | Video

The web posts include the suggestion to collect photographs as well as home and work addresses for the people on the possible target list. The bulletin says the the list includes target suggestions ranging from U.S.-based think tanks to military contractors.

Al Qaeda has used the English-speaking Gadahn in numerous videos.

The FBI document notes that in one from March 2010 Gadahn "called for small attacks in the United States, but failed to have any observable resonance within the online extremist community." But the bulletin warns bin Laden's death may cause those who share his ideology to be more receptive.

A law enforcement official told CNN there is no indication a specific plot exists.

The official did not know if all the individuals on the list of possible targets had been briefed by law enforcement or whether they had been given any recommendations to protect their safety.

The FBI bulletins are intended for use by law enforcement and homeland security officials.