By Steve Politi, Special to CNN 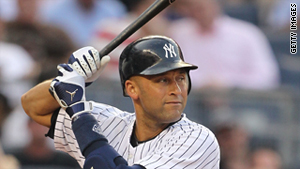 Derek Jeter is on the verge of being the first player to get 3,000 hits with the New York Yankees.

Editor's note: Steve Politi is a sports columnist for The Star-Ledger in Newark, New Jersey, who has followed Derek Jeter's career with the Yankees

(CNN) -- The road to one of the most exclusive clubs in baseball hit a pothole this week when Derek Jeter, just six hits away from 3,000 in his career, was sidelined with a calf injury.

But considering the other obstacles he has overcome in his 17-year career with the Yankees, a muscle strain is nothing.

The win-at-all-costs mentality of the most successful franchise in sports. The demanding and fickle owner, the late George Steinbrenner. The constant scrutiny from the tabloids in baseball's biggest media market.

Twenty-seven men have reached the 3,000-hit plateau, starting with Cap Anson of the old Chicago Colts in the 1890s, to Ty Cobb and Hank Aaron and Pete Rose, and most recently, Craig Biggio.

None, however, have had a path to membership quite like Jeter. He will become the first player to reach this milestone in New York, where he has faced an unprecedented level of pressure and scrutiny, and despite it all, managed to keep his reputation nearly as pristine as his career resume.

That resume includes five World Series championships, seven American League pennants and a spot in the postseason every year but one. He was the MVP of the Subway Series against the Mets in 2000, and one year later, made one of baseball's most famous plays in the division series against the A's, forever known as "The Flip."

Of course, playing for the Yankees has its benefits. He's been on an All-Star-laden roster his entire career, earning more than $200 million in salary from the team alone during this 17 years. He's building a $7.7 million house in Tampa that's about the size of a Best Buy and has dated singer Mariah Carey and actress Minka Kelly (his current flame) among many others.

But with that comes challenges.

"He's certainly as dignified a figure as any Yankee since Lou Gehrig, and the way he's carried himself on and off the field has separated him from the pack," said Ian O'Connor, author of "The Captain," a recent best-selling biography on the future Hall of Famer.

"I think being a scandal-free, steroid-free superstar at a time when we've seen so many dramatic falls from grace in sports -- Tiger Woods, A-Rod, Brett Favre, maybe Lance Armstrong -- has meant a ton to Jeter's image and to the Yankee brand. In a lot of ways Derek is the last man standing."

That last man is having a difficult season. Jeter is batting .260, a far cry from his .312 career average, leading to a chorus of calls on sports talk radio for Yankees manager Joe Girardi to drop him from his leadoff spot in the lineup. He will turn 37 on June 26, and the talented rookie with the boyish looks who broke into the majors in 1996 might be finally showing his age.

Paul Molitor, another member of the 3,000-hit club, remembers meeting Jeter back then. He was impressed with the way Jeter not only sought him out before games to shake his hand, but with the way he handled himself at the plate. No situation seemed to faze him.

Molitor should know. He not only reached the 3,000-hit club on September 16, 1996, with the Minnesota Twins, but he watched teammate Robin Yount go through the same chase and saw the toll it took on him.

"As much as you prepare for it and try to stay as professional as you can, that gets harder as you get closer," Molitor said. "In New York, it's probably exponentially harder than I could have imagined, plus Derek is on a first-place team."

Jeter has faced that pressure from the beginning. He was dropped onto a team built to win a World Series -- and it did in '96, ending an 18-year drought -- and those expectations have not changed.

To reach 3,000 hits in any city requires a combination of talent, luck and good health. To do it in New York, and to do it for a franchise that accepts nothing less than a championship and spends $200 million in that pursuit, a player needs an entirely different set of survival skills.

"Joe DiMaggio didn't have to worry about a single misstep in a bar being captured by any one of dozens of people in there with cell phone cameras," O'Connor said, "and yet Jeter has navigated an environment of almost 24/7 electronic scrutiny -- while dating an endless parade of starlets -- with remarkable grace."

Part of what has made Jeter successful, of course, is his refusal to spend much time acknowledging moments such as this. Jeter hates questions about individual accomplishments, and when he passed Gehrig as the Yankees all-time hit leader two years ago, was more relieved than excited.

The increased attention has not only cast a brighter light on Jeter's accomplishments, but on his struggles this season. Not all of the criticism is fair -- Jeter, as his general manager Brian Cashman points out, is still "above average for his position" -- and his team is still on pace to make the playoffs.

Only three players reached their 3,000th hit before their 37th birthday (Yount, Cobb and Aaron). Far more often, for players such Wade Boggs and Al Kaline, the moment comes at the end of a career.

Molitor, for one, said he believes Jeter "will play long enough to be in the top five on that list all time." Before he can think about that territory, that sore calf has to heal so Jeter can get the final six hits he needs for a milestone that still remains one of the most difficult in sports to reach.

He'll likely get there in front of a sold-out crowd with the millions more watching on national TV. But that's not unusual for Jeter. He'll reach 3,000 hits like everything else about playing in New York: the hard way.

"I'm just hoping he takes the time to sit back and say, 'I've really done something here,' and celebrate a little bit," said Don Zomer, his high school coach. "I think he will, because it's been quite a journey."