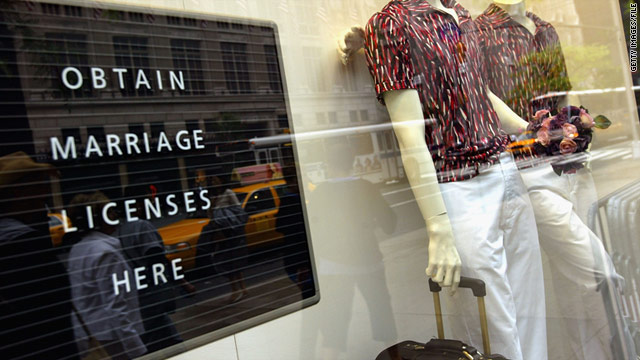 (CNN) -- New York's state Assembly Wednesday night approved a same-sex marriage bill, sending it to the Senate, where it faces a closer vote.

It would grant same-sex couples equal rights to marry "as well as hundreds of rights, benefits and protections that are currently limited to married couples of the opposite sex," according to Gov. Andrew Cuomo's office.

"This is an immense step toward achieving true equality for all here in New York," said Democratic Assemblyman Daniel O'Donnell, who argued that he and his partner should be allowed to marry.

Republicans defended their opposition, saying it did not mean they were intolerant.

"It doesn't make me a bigot," said Assemblyman Steve McLaughlin. "It makes me a traditional American."

"Marriage to me has a separate importance and it has to do with a man and a woman," said Republican Nancy Calhoun.

Senate Republicans also met Wednesday on the issue, and discussed the law's wording.

There was no decision on when it may come to the floor. A vote there likely won't happen until Friday, at the earliest.

Currently, 31 senators, including two Republicans, are in favor of the bill. Backers need one more GOP member to vote in favor for it to pass.

The act would amend the state's Domestic Relations Law to say, among other changes, that "no application for a marriage license shall be denied on the ground that the parties are of the same or a different sex."

The issue also is being debated in California, where a federal judge ruled Tuesday that another judge who ruled against a ban on same-sex marriage and later revealed that he is gay showed no evidence he was prejudiced in the case. Supporters of the ban said they would appeal.

CNN's Laura Dolan and Leigh Remizowski contributed to this report.