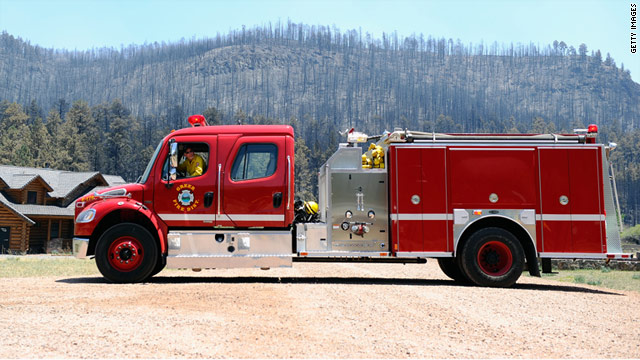 A firefighter keeps an eye on the smoking hillsides surrounding the mountain community of Greer, Arizona, on Monday. Fires have moved across the border into New Mexico.
STORY HIGHLIGHTS

(CNN) -- A fast-growing wildfire in southeast New Mexico prompted the evacuation Tuesday of White City, a small community on the outskirts of the Carlsbad Caverns National Park, a fire official said Tuesday afternoon.

The blaze, which has so far spread to some 16,000 acres, is 10% contained, said Jennifer Myslivy, a spokeswoman for the incident management team in charge of the firefighting effort.

Myslivy estimated that about 300 people, including tourists and visitors to the park, were impacted by the White City evacuation order.

The blaze was first reported late Monday afternoon. Within an hour, the park had to close and staff had to evacuate visitors from Carlsbad's famously deep caverns, said Joel Arnwine, emergency manager for Eddy County, New Mexico.

It took park officials about an hour to evacuate 200 to 250 visitors from inside the caves.

The fire, dubbed the Loop fire, has caused some damage to buildings in the park, but crews have been able to secure the vistors center, Myslivy said.

About 200 people from the National Park Service, the Bureau of Land Management, the U.S. Forest Service and Eddy County's volunteer fire department are working the blaze.

However, high winds kept aerial resources grounded Tuesday, Myslivy said. When the winds die down, a helicopter and several single-engine air tankers stand at the ready to drop water and fire retardant on the flames.

U.S. Highway 62/180 is closed from Dark Canyon Road to the New Mexico-Texas state line, as crews are conducting burnout operations meant to keep the fire from crossing the highway.

The blaze is burning in steep terrain along the only route into the Carlsbad Park, State Highway 7.

CNN's Dana Ford and Dave Alsup contributed to this story.