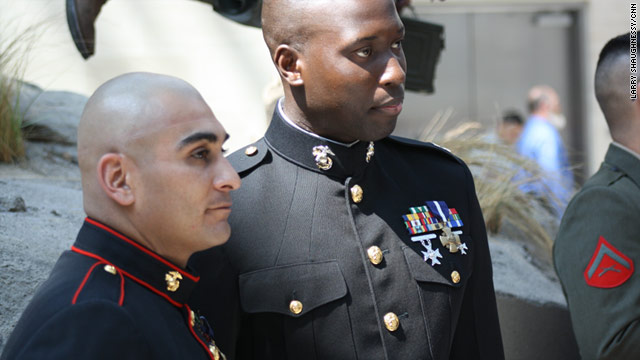 Quantico, Virginia (CNN) -- Capt. Ademola Fabayo and Staff Sgt. Juan Rodriguez-Chavez are both immigrants to the United States, both Marines and, most important of all, both heroes of a rare order.

On Friday, Secretary of the Navy Ray Mabus presented both men with the Navy Cross during a ceremony at the National Museum of the Marine Corps. The Navy Cross is the second-highest award for valor in the military, surpassed only by the Medal of Honor.

They were on a mission with two platoons of Afghan troops and some other U.S. Marine and Army trainers to meet village elders in Ganjgal, Afghanistan, on September 8, 2009. They knew the village was in a dangerous valley.

"The valley, which is located very close to the Pakistani border, is a known approach route for insurgents," Mabus said at Friday's awards ceremony.

Their fears were realized when some 50 Taliban fighters attacked their column.

"As that column approached the village, just before sunrise, every light in the village went off. And minutes later the world became fire," Mabus said. "From three sides of the column, over a distance of two-thirds of a mile on either side, rocket-propelled grenades and small-arms fire began to rain down."

Fabayo, a lieutenant at the time and commander of the mission, was on foot when the attack started. He and the troops he was with fired back, but they were trapped for about two hours. When he called for close-air support, he was told that the fighting was too close to the village and civilians would be at risk. So Fabayo organized a team of Afghan soldiers to attempt to break out of the ambush and head back to the rear and relative safety. He got them to cover, treated their wounds. But four of his Marines were missing.

Rodriguez-Chavez, driving an armored Humvee as part the column's security element, called Fabayo and begged to drive up and help, Fabayo said no. He wanted no more Marines in the kill zone

"As the only vehicle moving anywhere, particularly into the fight, their Humvee became the most obvious target on the battlefield and it was hit again and again. But with no other way to get to their friends available, they kept going, returning fire entire time," Mabus said.

By now Fabayo was with Rodriguez-Chavez in the Humvee as he drove into the kill zone a fourth time under heavy fire. With Fabayo in the gun turret, the most exposed part of the truck, they found the four missing Marines. Unfortunately, they all died fighting off the ambush. Nonetheless, Fabayo, Rodriguez-Chavez and several other Marines and soldiers risked their lives to get the four fallen Marines off the battlefield.

Fabayo is now a trainer at Quantico, where new Marine Corps officers go through basic training. Rodriguez-Chavez is also a trainer, at Ft. Leonard Wood in Missouri.

Fabayo was born in Nigeria but considers himself a New Yorker. Rodriguez-Chavez is a native of Acuna, Mexico.

Mabus noted that these heroes were fighting for their adopted nation:

"Neither of the recipients of the Navy Cross today were born in this country. But through their active service, both have demonstrated a deep and enduring love for the United States of America and a commitment to defend everything it represents."