Can a food truck change a neighborhood? Editor's note: This summer, CNN's Defining America project will be traveling the country with the CNN Express bus to explore the stories behind the data and demographics that show how places are changing. This week, CNN brings you coverage from North Carolina.

Charlotte, North Carolina (CNN) -- Most of the time, ordering a burrito is just trying to get lunch.

But ordering one from a food truck in Charlotte could be a political act.

After a 2008 Charlotte ordinance tightened restrictions on mobile food vendors, several went out of business or left town. But with a changing population that has tasted food truck fare in other cities, the rules are again being debated -- much to the chagrin of some neighborhoods here.

Some in Charlotte said the food truck debate is a test of the city's culture and whether this Southern boomtown can support grassroots street food like residents do in Austin, Texas; Portland, Oregon; or Washington.

Others said it's a fight over the character of neighborhoods, over whether food trucks are a service or a dangerous signal of a place that's failing to thrive.

Still others said it's a matter of discrimination. When the ordinance passed and enforcement increased, most food trucks operating in Charlotte were run by Latinos, and their businesses took the hit.

There's no official count of how many businesses closed or moved; a May code enforcement report said the number of vendors "dropped significantly" since the new regulations began. But everyone agrees there are fewer tortas and churros being served on the street.

No matter what the fight is, it's back. An online petition touting the tagline, "Carne asada is not a crime," has more than 400 signatures. More than 600 people attended a food truck rally last month, when all the vendors sold out of their stock.

Now some city leaders want to reconsider some rules, worried they might stifle small-business owners and mar Charlotte's reputation as a progressive, business-friendly place.

'A little piece of home'

When Rosendo Medina began running a food truck in Charlotte nearly a decade ago, he made a living on the dollars of construction workers between shifts, bar-goers looking for a quick bite and other Mexican immigrants looking for a taste of home.

He opened for the day as others were finishing their workday, and stayed open as late as they stayed out. 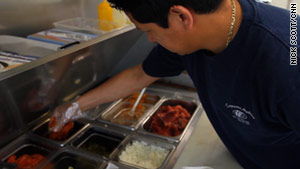 Rosendo Medina runs Taqueria Medina from a truck, but works longer days than he did before.

But in 2008, Charlotte city leaders were hearing complaints from neighborhood groups about litter, noise and loitering around mobile food vendors. They responded with stepped-up enforcement of existing rules and more regulations.

Vendors can't be within 400 feet of a residential area, or each other, and must get new permits for their location every 30 days. A vendor can set up in one location for up to 90 days, but after three months, permits there can't be renewed. The vendor can't return there for another year.

One afternoon last month, Medina's truck, Taqueria Medina, was parked outside a chiropractic office about five miles northeast of the city center. A few customers stopped for bean burritos or chorizo tacos, but mostly, business was quiet.

Medina has adapted to the slow trickle of repeat customers, the lunch rush, and the quick after-work dinner.

"I lost a lot of customers," Medina said through a translator. "Before, I only opened from 5 (p.m.) to 12 o'clock. Now, I have to open all day to make the same money."

He said he's been attending meetings with other food truck owners and trying to reach out to city leaders. He's working with Action NC activist Hector Vaca, who has been lobbying the City Council to reconsider the regulations.

"When you go to these mobile food vendors, you're getting authentic food," Vaca said. "A lot of them see this as a little piece of home."

But the cause isn't popular with everyone.

'For my community first'

Ed Garber grew up on the east side of Charlotte, in the Sheffield Park neighborhood. He remembers the area as friendly, but not fancy. The area was always working class, and always diverse, he said, filled with young families getting their start.

Liver mush, a North Carolina treat from way back when

He still lives in Sheffield Park, but much has changed. The apartments that seemed clean and comfortable in the 1980s have hardly been updated since then. Many of his neighbors moved away to bigger houses. The area became a stopping point for people new to the town or the country. They don't have a stake in the community, he said, because they think of it as a temporary residence, where their own plans for a house, yard and good schools seem unlikely to come true.

Eastland Mall -- once home to a J.C. Penney, Belk and Sears -- closed last year. Garber said it's a bit of a drive to a nice grocery store or to the city's lauded light rail system.

At least the restaurants -- Thai, Mexican, Japanese, Mediterranean -- are something to be proud of, he said.

When food trucks began parking in the empty lots of closed businesses, he was perturbed. The trucks drew noisy crowds and stayed open too late, he said. Then other small vendors began to set up nearby. The trucks reflected badly on businesses that remained open, he said, and competed with brick-and-mortar restaurants.

He doesn't believe the truck owners were making any investment in the community. No business would move to a community with a falling income, he said, especially if it looked like a flea market was operating outside.

North Carolina: By the numbers

"This area needs a chance to be middle class. If we don't have a mix of people, everybody loses," said Garber, 36. "Any time the city has a plan for this area, it's selling it short. Their vision is to keep it where it is."

Garber was among the residents who complained to the City Council about food trucks in 2008. Since the issue has been raised again, Garber said, he and others have been accused of racism.

Some people use the food truck debate to veil complaints about immigration or the growing Latino population, Garber said, but he doesn't consider this a racial issue.

Garber calls the anti-food truck Eastside Political Action Committee a diverse group, but said Hispanic residents of his community haven't gotten involved with his side of the fight.

The issue has only gotten more complicated as food trucks have seen a rise in popularity across the country and mobile food has gone gourmet.

Allowing trucks to operate at different hours or with different policies might work in certain districts of the city, Garber said, but he wants to see sustained regulation and more permanent businesses before food trucks are allowed back to the east side of Charlotte.

'Take a look at the menu'

Charlotte's food truck future could be developing this summer: Every Thursday for the last month, a parade of food trucks has taken over a parking lot near the city center as part of Chow Down Uptown.

We find that they bring sort of a unique culture to what they're doing, and they do have followers that really watch their menu. They are being responsible. They want to reach out to people.
--Lynn Henderson, Charlotte City Center Partners

The event was organized by Charlotte Center City Partners, an economic and cultural development organization, mostly to gauge Charlotte's interest in the food truck phenom.

Because it's a special event, trucks are allowed to be parked close to each other, although they still shut down by 9 p.m. -- just in time for their crowds to head to a nearby bar or music venue.

Lynn Henderson, Center City Partners' director of programs and event operations, said the organization doesn't have an official stance on the city's food truck regulations. But Charlotte is a changing place -- the 2010 Census showed North Carolina's largest city had added nearly 200,000 residents in the last decade -- and what seemed best in 2008 might not be best now.

"We find that they bring sort of a unique culture to what they're doing, and they do have followers that really watch their menu," Henderson said. "They are being responsible. They want to reach out to people. We hoped people would come out, talk to some of the people who operate the trucks and maybe get a little more clarity about who some of them are."

Kelli Crisan was used to seeing food trucks during the years she lived in Florida, but when she moved to Charlotte six months ago, there didn't seem to be any.

After a 22-year career in real estate, she pieced together a business plan with friends Darryl Olsen and Lenka Bazantova: Roaming Fork food truck.

Customers track the truck's whereabouts using social media and sometimes drive to find them and their fried deviled eggs.

Crisan said it's probably good she didn't know about the mobile food vendor ordinance before she'd fallen for Charlotte and the idea of running a food truck.

"It would have swayed me away," she said. "Once I did discover it, I was so far into it, I was going to make the best of what's out there and push as hard as I can."

Since then, she has signed the petition to support owners of "loncheras," the Spanish term for food trucks.

She and her partners have fallen for the community that surrounds food trucks in Charlotte -- the vendors who helped them launch, the customers who stick with them, the friends they've met through the order window.

Their plan: Be invested in every Charlotte community where they park.

And they may have converted people who see a food truck and think "roach coach," she said.

"People walk by and give (the trucks) a crooked look, but then you have them take a look at the menu," Crisan said. "I think it's slowly catching on."