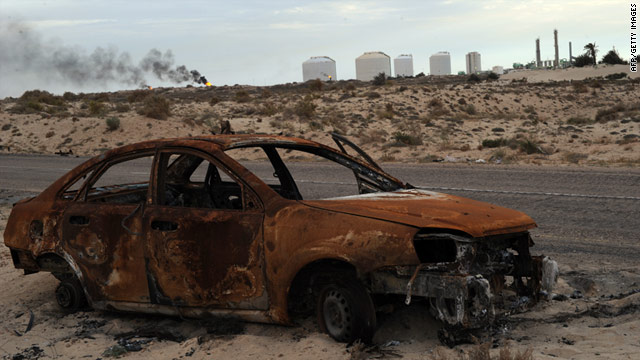 A charred car sits near an oil terminal in the section of eastern Libya now held by the Transitional National Council.
STORY HIGHLIGHTS
RELATED TOPICS

Washington (CNN) -- The rebel government in control of the eastern part of Libya has made its first sale of oil from territory it controls, the State Department confirmed Wednesday.

Tesoro, a U.S. oil refiner, entered into a deal May 25 with the Transitional National Council based in Benghazi, Libya for 1.2 million barrels of Libyan crude oil, the State Department said in a written statement. The shipment was scheduled to arrive aboard the MT Equator, a Liberian-flagged tanker, at the Single Point Mooring in Hawaii on Wednesday. The dollar value of the deal is not known.

U.S. support for additional oil sales with the TNC will continue as a means to support additional revenue streams for the Libyan people, the statement said.

The sale was made possible following an April announcement by the Office of Foreign Assets Control at the Treasury Department that established a new licensing policy with Libya. That action was taken to ease barriers to certain oil related transactions with the TNC, in place because of wider U.S. sanctions on Libya.

The announcement came the same day Secretary of State Hillary Clinton arrived in the United Arab Emirates for a meeting with the Libya Contact Group, a coalition of various countries and international organizations that seek to build support for the TNC while preparing for Libya's future after the presumed end of Moammar Gadhafi's regime. This is the third meeting of the group.

France, Italy and Qatar are among the small number of countries who have officially recognized the TNC as the legitimate government of Libya. While the United States has yet to take that step, President Barack Obama "has invited them to open an office in Washington," a senior administration official told reporters traveling with Clinton.

"We are still considering it but there's no final decision as of right now," the official said of U.S. efforts to offer formal recognition to the TNC.