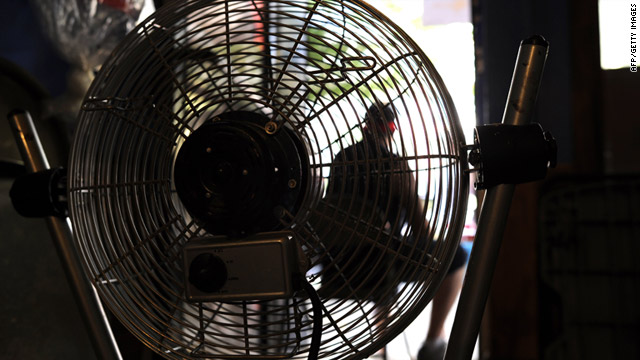 (CNN) -- Five possible heat-related deaths, all involving people 60 years or older and having pre-existing medical conditions, have been reported by health officials in three states, underscoring the danger posed to those most vulnerable in the searing heat wave that has gripped much of the eastern United States for nearly two weeks.

Martin Belkin, a patient at Sunrise Care Center, asked to be wheeled outside at 2:45 p.m. and was found unresponsive at 6 p.m. by workers at the facility. His temperature, taken nearly two hours after he was discovered, was 101.4, according to the Milwaukee County Medical Examiner's Office.

Milwaukee had a record high temperature of 97 degrees Tuesday, and a heat advisory had been issued the day before, warning of extreme heat between noon and 8 p.m. Tuesday, WISN reported. The station reported Belkin also suffered from a number of medical conditions and had been in the hospital in recent months.

How to stay safe in scorching heat

An autopsy has been performed, and a ruling on cause of death is pending further toxicology testing, which may take several weeks, said Karen Domagalski of the medical examiner's office.

Two deaths also were reported in Maryland and two in Tennessee.

In Maryland, two senior residents, ages 65 or older, have died in the past 10 days from excess heat exposure, according to the state's Department of Health and Mental Hygiene. Both of the affected residents, a Cecil County man and an Anne Arundel County woman, had underlying medical conditions, the health agency said.

Two deaths related to the heat were reported in Shelby County, Tennessee, county health department spokeswoman Heather Reynolds said. A 75-year-old woman was found dead in her home Monday, and a 60-year-old man who fell from his wheelchair in Tipton County was taken to a hospital in Shelby County, where he died Tuesday,

The woman had a working air conditioner that wasn't turned on, and none of her windows were open, Reynolds said. She had only a fan on. The Shelby County chief medical officer said the woman had a number of medical conditions, including hypertension, but heat was listed as a contributing factor.

The Tipton County man was an amputee who had diabetes and was overweight. He was apparently in his wheelchair on a ramp to his van when he fell. Neighbors passing by alerted emergency services, and he was taken to Tipton County Hospital before being brought to Shelby County.

"When hot weather claims the lives of our residents, we are reminded how important it is to take precautions against heat exposure," Maryland Gov. Martin O'Malley said in a statement issued by the state health department. "We need to remember to check on our families, friends and neighbors and especially those who are most vulnerable."

Is the heat wave affecting you? Share your story

Much of the Southeast has endured blistering heat, with little rain relief, since the last week of May, CNN Meteorologist Rob Marciano said, and the rising mercury now is spreading as far north as Minneapolis. Heat indices, which include humidity levels to show how the temperature feels, were in the upper 80s and low 90s well before noon in cities such as Washington, Atlanta, New York and Detroit.

A couple of cold fronts "will flirt with the western Great Lakes, so places like Chicago, maybe New York City, will see some brief cooling, but everything south of the Mason-Dixon Line (will experience) heat indices over 90 as well," Marciano said.

Dangerous heat is expected through Thursday, and possibly into Friday, in the large Eastern cities, he said, "so take care of your neighbors, certainly the elderly ones, and those who may not be able to handle this heat."

"Air quality is an issue, too," Marciano said. "Also, ozone builds up in big cities like Atlanta, so we're at a Code Orange today. Not only for Atlanta, but I think tomorrow over 80 cities will be in unhealthy categories."

The Maryland health department issued tips for recognizing symptoms of heatstroke and heat exhaustion, and for dealing with the searing summer weather:

• Heatstroke is a serious illness characterized by a body temperature greater then 105 degrees. Symptoms may include dry red skin, convulsions, disorientation, delirium and coma. The onset of heatstroke can be rapid: A person can go from feeling well to a seriously ill condition within minutes. Treatment of heatstroke involves the rapid lowering of body temperature using a cool bath or wet towels. A heatstroke victim should be kept in a cool area; emergency medical care should be obtained by dialing 911.

• Heat exhaustion is a milder form of heatstroke that may develop because of a combination of several days with high temperatures and dehydration. Signs of heat exhaustion include extreme weakness, muscle cramps, nausea or headache. Victims may also vomit or faint. Heat exhaustion is treated with plenty of liquids and rest in a cool, shaded area. Those on a low-sodium diet or with health problems should contact a doctor.

• In hot weather, it's important to drink plenty of fluids such as water and fruit juice to prevent dehydration, and be aware that alcohol can impair the body's sweat mechanism, as can fairly common medications such as antihistamines and diuretics. Other tips include wearing loose-fitting, lightweight and light-colored clothes, a hat and sunglasses; avoiding direct sunlight as much as possible; taking it easy outdoors; and seeking air-conditioned areas such as a shopping mall or public library if you don't have air conditioning at home.