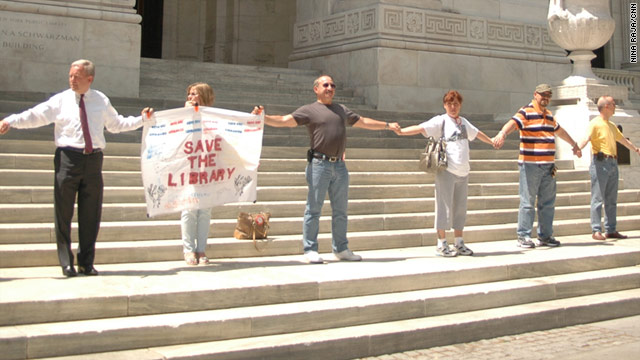 Saturday's human chain at the 42nd Street branch was part of a nationwide campaign against funding cuts for public libraries.
STORY HIGHLIGHTS

Mayor Michael Bloomberg's proposed budget cuts $40 million from the branches in Manhattan, the Bronx and Staten Island. Queens and Brooklyn library branches have their own separate budget and are facing their own reductions.

Hug the Library was part of the savenyclibraries.org campaign organized by the advocacy group Urban Librarians Unite in response to nationwide cuts to public libraries.

"We chose the Schwarzman building for its iconic status, but we feel that the most important library in America is the one that is in every community," said ULU representative Christian Zabriskie in a statement.

The continuous human chain also symbolized a human shield to protect the library from the most significant decrease of weekly access, books on the shelf and staff in its 100-year history.

"We have three weeks to save the library. This is a clarion call to librarians all over the country to embolden people to speak up to their council members and mayors to save our libraries," said City Councilman Jimmy Van Bramer of Queens.

Libraries across the country have been facing budget cuts. In a Library Journal 2010 budget survey, 72% of responding libraries reported budget cuts and 43% reported staff cuts.

"When the economy declines, people come to the library for help with finding jobs. We've helped tens of thousands reposition themselves to find jobs ever since the economy tanked," said NYPL President Paul LeClerc. "One of the most important things that libraries do across America is to let people be online for free."

According to a Bill & Melinda Gates Foundation study, two-thirds (67%) of U.S. public libraries are the only provider of free public access to computers and the Internet in their community.

A library advocacy flier quoted Pedro Munoz, a junior high school dropout and recovering addict, as saying the library "has saved my life. Without it I would still be out there on the street." According to the flier, he is learning to read and write in free adult literacy classes at the Tompkins Square Library in Manhattan.

"The public values the free books, music, DVDs and e-books that libraries provide. The institution of the library exists as a cultural storehouse, a common space and a center of learning, self-improvement and entertainment in the community," ULU Communications Director Lauren Comito said in a statement.

New York's City Council and Mayor Michael Bloomberg will negotiate a budget in a few weeks.