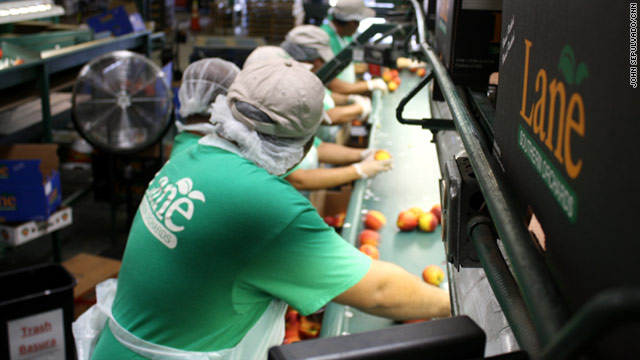 Atlanta (CNN) -- Are you out of work? Are you looking for a job? Do you live in Georgia?

If the answer to those questions is "yes," Gov. Nathan Deal has an idea for you: Become a farm worker.

"We still have an unemployment level here that is unacceptably high, whether or not we can provide some way of transitioning some of those individuals," Deal said last week.

"Perhaps it requires some relocation in some cases for them to be able to fill some of these jobs. We're going to explore all of those things."

Deal is looking for ways to fill a farm worker gap after some areas lost more than 50% of their laborers, the Georgia Fruit and Vegetable Growers Association said. Many workers left Georgia after the governor signed an Arizona-inspired immigration law allowing local police to identify and detain illegal immigrants, the group said.

Other countries have tried similar ideas to stimulate growth. Japan has a program to put young underemployed workers on farms during the summer. The program was moderately successful until a tsunami hit the country in March.

In Colorado, 1,799 U.S. citizens applied for farm jobs in 2009, according to the state's Department of Labor and Employment. That was up from 39 in 2008, although state officials say the number again fell in 2010 to the "low hundreds."

With a 9.6% unemployment rate in Georgia, University of Georgia Economist Jeff Humphries thinks the governor's plan could work.

"Employers have the upper hand, and people looking for jobs are more desperate than ever before," Humphries said. "Given that unemployment benefits are starting to run out for an increasing number of workers...this is the best time to try it out."

For some unemployed Georgians, however, the idea is not so appealing.

Marci Mosley, who lives in Atlanta, has been out of work for more than a year. She said she would only work on a farm as a last resort.

"I have a phobia of snakes," Mosley said. "I hate spiders...You have to get up early in the morning, and it's hot."

Mosley, an African-American, said she used to work on her grandfather's farm in Texas, where he stressed the importance of a good education to get off the farm. Mosley believes Deal's plan would be a tough sell for many other African Americans, who saw their older relatives struggle farming.

"It could be a setback for people," Mosley said. "The only people that would even think about doing that are people who have nothing else left...An educated black person does not have time for that. They didn't go to school to work on a farm, and they're not going to do it."

As for unemployed white Georgians, they're not showing up for agriculture jobs either, farm managers said.

In Peach County, more than half of residents are white, according to the U.S. Census Bureau, and 26% are out of work, according to the Georgia Department of Labor. The county is kept afloat by agriculture jobs.

One of the biggest employers is Lane Packing, where workers there pick, package and ship peaches. It's hard, dirty work that few people will do, especially U.S. citizens, Lane Packing CEO Mark Sanchez said.

To find workers, Lane Packing has participated in a U.S. Department of Labor guest worker program. Sanchez explained the vast majority of the workers here are legal immigrants.

"We're required to pay a minimum wage of $9.12 an hour," Sanchez said. "Plus free housing, free transportation from their home and back. Also, most of the workers are paid on a piece rate production basis."

That adds up to a weekly paycheck $230 more than the average Georgia unemployment check.

While putting the unemployed to work on farms is a novel idea, the workers in Georgia who will benefit most from the farm shortage are legal immigrants, said Humphries, the University of Georgia economist.