FAA to crack down on people who target planes with lasers 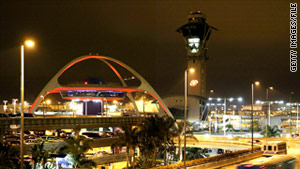 Federal Aviation Administration officials on Wednesday plan to announce they will impose civil penalties on people who point lasers into the cockpit of aircraft.

The number of pilots reporting being targeted by lasers nearly doubled last year to 2,836, up from 1,527 the previous year, the FAA said.

Officials say the increase is likely attributable to the increased availability of cheap and powerful laser pointers, to the introduction of green lasers which are more easily seen, and to increased reporting of laser events by pilots.

"Shining a laser into the cockpit of an aircraft is not a joke," FAA Administrator Randy Babbitt said in a statement. "These lasers can temporarily blind a pilot and make it impossible to safely land the aircraft, jeopardizing the safety of the passengers and people on the ground."

To date, the government has dealt with the problem largely through a hodgepodge of state and local laws. But on Wednesday, the FAA planned to release a legal interpretation concluding that laser beams can interfere with a flight crew performing its duties while operating an aircraft, a violation of federal aviation regulations. In the past, the FAA has used the regulation against passengers on board aircraft who interfere with an aircraft's crew.

The maximum civil penalty the FAA can impose for violating the regulation is $11,000 per violation.

"Our top priority is protecting the safety of the traveling public," Transportation Secretary Ray LaHood said in a statement. "We will not hesitate to take tough action against anyone who threatens the safety of our passengers, pilots and air transportation system."

A bill that would criminalize purposefully aiming a laser device at aircraft is currently pending in Congress.

While the problem is compounded by the difficulty of tracking down offenders, several individuals have been caught in recent years, usually with the assistance of local police officials in helicopters and on the ground.

The FAA first began paying close attention to the issue in the mid-1990s. The Food and Drug Administration, which regulates lasers, required outdoor laser light show operators to notify the FAA of proposed laser operations and resolve any objections that the FAA may have.

In 2005, the FAA created a formal reporting system to collect information from pilots. During the first year in operation, nearly 300 reports were collected.