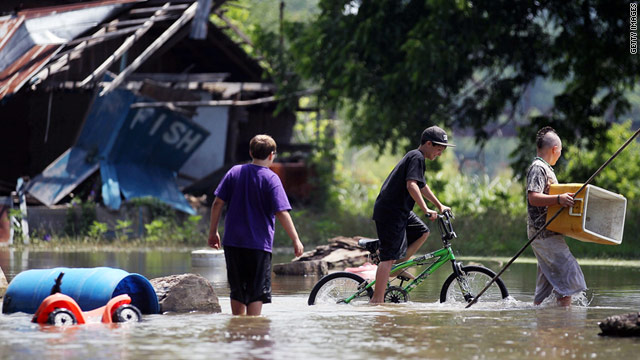 (CNN) -- Louisiana's swollen Atchafalaya River was slowly receding along its entire length Tuesday after federal authorities flooded it to save the Mississippi River cities of New Orleans and Baton Rouge, the National Weather Service reported.

The Atchafalaya crested at more than six feet above flood stage at Morgan City, about 80 miles west of New Orleans, and forecasters are projecting a long, steady decline, said Shawn O'Neil, a meteorologist at the Weather Service office in Slidell.

Leroy Breaux, a resident of nearby Amelia, said the water rose about halfway up Morgan City's sea wall, where the name of the town is etched into the concrete.

"The water is up over the wall, and it's like the word Morgan City is sitting in the water," he said. Some businesses along the waterfront outside the sea wall flooded, but the sea wall -- and a massive barge sunk into nearby Bayou Chene -- prevented high water from reaching neighborhoods in and around the area, Breaux said.

"The blessing is there's no rain. If you had the amount of rain you had in 1973, you would have a much worse problem," said Breaux, who lived in Amelia during that year's flood and now serves as chairman of a local flood-control district.

The Army Corps of Engineers began diverting water from the Mississippi into the Atchafalaya basin on May 14 by opening the Morganza Spillway above Baton Rouge. The agency began closing the spillway last Wednesday, shutting seven of the 17 bays opened during the operation by Tuesday evening, Corps spokeswoman Rachel Rodi said.

At the peak of the diversion, as much as 1.2 million gallons of water per second were pouring into the Atchafalaya basin from the Mississippi, the Corps reported. The Atchafalaya may not reach its normal levels until "well into June," O'Neil said.

Officials said last week that flooding in the basin was not as severe as expected after the spillway's opening. But at least 1,230 structures in 13 parishes were affected by rising water, according to the state Homeland Security and Emergency Preparedness office.