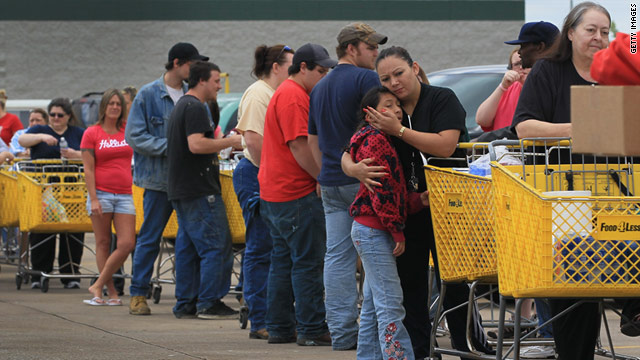 Blanca Lopez holds her daughter, Bianca, as they wait in line with other storm victims to get donated items in Joplin on Thursday.
STORY HIGHLIGHTS

Did you experience the tornado in Joplin, Missouri? Send your photos, videos or stories. And tune in at 8 ET Saturday night for CNN Presents' "A Twister's Fury: In the Path of Destruction." CNN shows you how large parts of Joplin, Missouri, were reduced to rubble in minutes, yet hope remains with amazing stories of survival.

Joplin, Missouri (CNN) -- Anxious family members waited on news of their loved ones as officials in Joplin, Missouri, the flashpoint of Sunday's devastating tornado, worked Friday to identify the dead.

"It just takes time to go through those identifiers and get them to the families," he said.

Authorities said Friday that 132 people had died as a result of the tornado. It is the highest death toll from a single tornado in the United States since modern record-keeping began in 1950.

The number of people missing from the massive tornado that swept through Joplin on Sunday night currently stands at 156, down from 232 a day earlier, a state official said Friday.

MO Gov.: 'This was an incredible storm'

At least 90 people on the original tally were found alive, but some names have been added to the missing list, Missouri Deputy Director of Public Safety Andrea Spillars told reporters.

Emergency management crews are working 24 hours a day in the recovery effort, she said.

As of Friday morning, more than 2,500 Missourians affected by Sunday's tornadoes have applied for federal assistance to help with home repairs and cover other personal losses, according to the Federal Emergency Management Agency.

The agency reported that more than $2.8 million worth of assistance has already been approved, which is separate from public assistance that the state can receive for emergency response needs and longer-term rebuilding projects like schools, roads and firehouses.

President Barack Obama is expected to tour Joplin on Sunday, meeting with state and local authorities as well as families affected by the devastation.

As officials worked to ensure the death and missing counts were up-to-date, some residents got answers on the fate of loved ones.

Michelle Hare said she learned that her 16-year-old son had been confirmed dead. Lantz was ripped from a car Sunday night by winds exceeding 200 mph, and was one of the people named Thursday.

The Hares had been among many around Joplin still desperately searching for family members. One of the frustrations was a holdup at the morgue. Some were told that they may have to wait for two weeks before they can visit to search for relatives.

Coroner Bridges said some people will be allowed into the morgue to identify family members if they know unique characteristics such as tattoos.

Missouri Gov. Jay Nixon said the magnitude of the storm has made the process of identifying victims difficult and will mean that some of the bodies will have to be identified by DNA.

"This is not a series of bodies lying in a row that are easily identifiable. There are pieces of folks," Nixon told CNN's Anderson Cooper. "There are very, very difficult scenes. It's not as easy as walking down a row and being able to instantly identify."

And many of the people who survived the tornado had stories to tell.

Aaron Cox said he frantically tried to find his sister after the storm.

Unlike many others in Joplin, Cox said, he found his sister while searching through leveled streets that were barely recognizable.

"I've lived in Joplin my entire life. But everything was so leveled. You had no idea where you were ... with the street signs gone. There was no houses, no trees, no nothing," said Cox, who documented his search for his sister on video.

"It was just completely barren."

FEMA has meanwhile been conducting preliminary damage assessments of storm damage elsewhere, including in

In Alabama, approximately one month after tornadoes touched down, nearly 77,000 individuals and households registered for federal disaster assistance, according to FEMA.

The agency has since approved $60.4 million in federal grants and low-interest disaster loans for that state, it said.